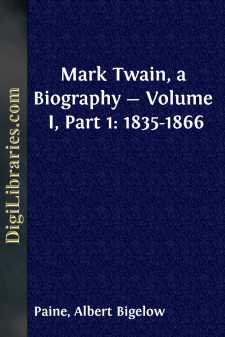 MARK TWAIN A BIOGRAPHY I ANCESTORS

On page 492 of the old volume of Suetonius, which Mark Twain read until his very last day, there is a reference to one Flavius Clemens, a man of wide repute "for his want of energy," and in a marginal note he has written:

"I guess this is where our line starts."

It was like him to write that. It spoke in his whimsical fashion the attitude of humility, the ready acknowledgment of shortcoming, which was his chief characteristic and made him lovable—in his personality and in his work.

Historically, we need not accept this identity of the Clemens ancestry. The name itself has a kindly meaning, and was not an uncommon one in Rome. There was an early pope by that name, and it appears now and again in the annals of the Middle Ages. More lately there was a Gregory Clemens, an English landowner who became a member of Parliament under Cromwell and signed the death-warrant of Charles I. Afterward he was tried as a regicide, his estates were confiscated, and his head was exposed on a pole on the top of Westminster Hall.

Tradition says that the family of Gregory Clemens did not remain in England, but emigrated to Virginia (or New Jersey), and from them, in direct line, descended the Virginia Clemenses, including John Marshall Clemens, the father of Mark Twain. Perhaps the line could be traced, and its various steps identified, but, after all, an ancestor more or less need not matter when it is the story of a descendant that is to be written.

Of Mark Twain's immediate forebears, however, there is something to be said. His paternal grandfather, whose name also was Samuel, was a man of culture and literary taste. In 1797 he married a Virginia girl, Pamela Goggin; and of their five children John Marshall Clemens, born August 11, 1798, was the eldest—becoming male head of the family at the age of seven, when his father was accidentally killed at a house-raising. The family was not a poor one, but the boy grew up with a taste for work. As a youth he became a clerk in an iron manufactory, at Lynchburg, and doubtless studied at night. At all events, he acquired an education, but injured his health in the mean time, and somewhat later, with his mother and the younger children, removed to Adair County, Kentucky, where the widow presently married a sweetheart of her girlhood, one Simon Hancock, a good man. In due course, John Clemens was sent to Columbia, the countyseat, to study law. When the living heirs became of age he administered his father's estate, receiving as his own share three negro slaves; also a mahogany sideboard, which remains among the Clemens effects to this day.

This was in 1821. John Clemens was now a young man of twenty-three, never very robust, but with a good profession, plenty of resolution, and a heart full of hope and dreams. Sober, industrious, and unswervingly upright, it seemed certain that he must make his mark. That he was likely to be somewhat too optimistic, even visionary, was not then regarded as a misfortune....