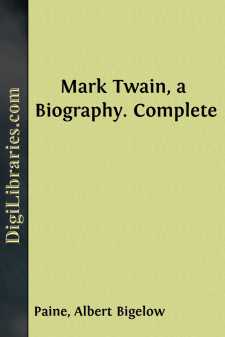 Certain happenings as recorded in this work will be found to differ materially from the same incidents and episodes as set down in the writings of Mr. Clemens himself. Mark Twain's spirit was built of the very fabric of truth, so far as moral intent was concerned, but in his earlier autobiographical writings—and most of his earlier writings were autobiographical—he made no real pretense to accuracy of time, place, or circumstance—seeking, as he said, "only to tell a good story"—while in later years an ever-vivid imagination and a capricious memory made history difficult, even when, as in his so-called "Autobiography," his effort was in the direction of fact.

"When I was younger I could remember anything, whether it happened or not," he once said, quaintly, "but I am getting old, and soon I shall remember only the latter."

The reader may be assured, where discrepancies occur, that the writer of this memoir has obtained his data from direct and positive sources: letters, diaries, account-books, or other immediate memoranda; also from the concurring testimony of eye-witnesses, supported by a unity of circumstance and conditions, and not from hearsay or vagrant printed items.

On page 492 of the old volume of Suetonius, which Mark Twain read until his very last day, there is a reference to one Flavius Clemens, a man of wide repute "for his want of energy," and in a marginal note he has written:

"I guess this is where our line starts."

It was like him to write that. It spoke in his whimsical fashion the attitude of humility, the ready acknowledgment of shortcoming, which was his chief characteristic and made him lovable—in his personality and in his work.

Historically, we need not accept this identity of the Clemens ancestry. The name itself has a kindly meaning, and was not an uncommon one in Rome. There was an early pope by that name, and it appears now and again in the annals of the Middle Ages. More lately there was a Gregory Clemens, an English landowner who became a member of Parliament under Cromwell and signed the death-warrant of Charles I. Afterward he was tried as a regicide, his estates were confiscated, and his head was exposed on a pole on the top of Westminster Hall.

Tradition says that the family of Gregory Clemens did not remain in England, but emigrated to Virginia (or New Jersey), and from them, in direct line, descended the Virginia Clemenses, including John Marshall Clemens, the father of Mark Twain. Perhaps the line could be traced, and its various steps identified, but, after all, an ancestor more or less need not matter when it is the story of a descendant that is to be written.

Of Mark Twain's immediate forebears, however, there is something to be said. His paternal grandfather, whose name also was Samuel, was a man of culture and literary taste. In 1797 he married a Virginia girl, Pamela Goggin; and of their five children John Marshall Clemens, born August 11, 1798, was the eldest—becoming male head of the family at the age of seven, when his father was accidentally killed at a house-raising....