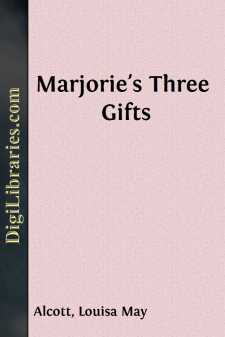 Marjorie sat on the door-step, shelling peas, quite unconscious what a pretty picture she made, with the roses peeping at her through the lattice work of the porch, the wind playing hide-and-seek in her curly hair, while the sunshine with its silent magic changed her faded gingham to a golden gown, and shimmered on the bright tin pan as if it were a silver shield. Old Rover lay at her feet, the white kitten purred on her shoulder, and friendly robins hopped about her in the grass, chirping "A happy birthday, Marjorie!"

But the little maid neither saw nor heard, for her eyes were fixed on the green pods, and her thoughts were far away. She was recalling the fairy-tale granny told her last night, and wishing with all her heart that such things happened nowadays. For in this story, as a poor girl like herself sat spinning before the door, a Brownie came by, and gave the child a good-luck penny; then a fairy passed, and left a talisman which would keep her always happy; and last of all, the prince rolled up in his chariot, and took her away to reign with him over a lovely kingdom, as a reward for her many kindnesses to others.

When Marjorie imagined this part of the story, it was impossible to help giving one little sigh, and for a minute she forgot her work, so busy was she thinking what beautiful presents she would give to all the poor children in her realm when THEY had birthdays. Five impatient young peas took this opportunity to escape from the half-open pod in her hand and skip down the steps, to be immediately gobbled up by an audacious robin, who gave thanks in such a shrill chirp that Marjorie woke up, laughed, and fell to work again. She was just finishing, when a voice called out from the lane,—

"Hi, there! come here a minute, child!" and looking up, she saw a little old man in a queer little carriage drawn by a fat little pony.

Running down to the gate, Marjorie dropped a curtsy, saying pleasantly,—

"Just undo that check-rein for me. I am lame, and Jack wants to drink at your brook," answered the old man, nodding at her till his spectacles danced on his nose.

Marjorie was rather afraid of the fat pony, who tossed his head, whisked his tail, and stamped his feet as if he was of a peppery temper. But she liked to be useful, and just then felt as if there were few things she could NOT do if she tried, because it was her birthday. So she proudly let down the rein, and when Jack went splashing into the brook, she stood on the bridge, waiting to check him up again after he had drunk his fill of the clear, cool water.

The old gentleman sat in his place, looking up at the little girl, who was smiling to herself as she watched the blue dragon-flies dance among the ferns, a blackbird tilt on the alderboughs, and listened to the babble of the brook.

"How old are you, child?" asked the old man, as if he rather envied this rosy creature her youth and health.

"Twelve to-day, sir;" and Marjorie stood up straight and tall, as if mindful of her years.

"Had any presents?" asked the old man, peering up with an odd smile.

"One, sir,—here it is;" and she pulled out of her pocket a tin savings-bank in the shape of a desirable family mansion, painted red, with a green door and black chimney. Proudly displaying it on the rude railing of the bridge, she added, with a happy face,—

"Granny gave it to me, and all the money in it is going to be mine."

"How much have you got?" asked the old gentleman, who appeared to like to sit there in the middle of the brook, while Jack bathed his feet and leisurely gurgled and sneezed....