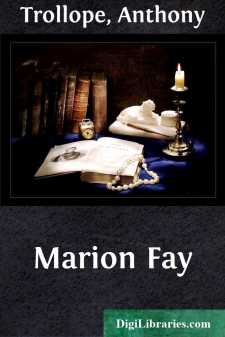 CHAPTER I. THE MARQUIS OF KINGSBURY.

When Mr. Lionel Trafford went into Parliament for the Borough of Wednesbury as an advanced Radical, it nearly broke the heart of his uncle, the old Marquis of Kingsbury. Among Tories of his day the Marquis had been hyper-Tory,—as were his friends, the Duke of Newcastle, who thought that a man should be allowed to do what he liked with his own, and the Marquis of Londonderry, who, when some such falling-off in the family politics came near him, spoke with indignation of the family treasure which had been expended in defending the family seat. Wednesbury had never been the Marquis's own; but his nephew was so in a peculiar sense. His nephew was necessarily his heir,—the future Marquis,—and the old Marquis never again, politically, held up his head. He was an old man when this occurred, and luckily for him he did not live to see the worse things which came afterwards.

The Member for Wednesbury became Marquis and owner of the large family property, but still he kept his politics. He was a Radical Marquis, wedded to all popular measures, not ashamed of his Charter days, and still clamorous for further Parliamentary reform, although it was regularly noted in Dod that the Marquis of Kingsbury was supposed to have strong influence in the Borough of Edgeware. It was so strong that both he and his uncle had put in whom they pleased. His uncle had declined to put him in because of his renegade theories, but he revenged himself by giving the seat to a glib-mouthed tailor, who, to tell the truth, had not done much credit to his choice.

But it came to pass that the shade of his uncle was avenged, if it can be supposed that such feelings will affect the eternal rest of a dead Marquis. There grew up a young Lord Hampstead, the son and heir of the Radical Marquis, promising in intelligence and satisfactory in externals, but very difficult to deal with as to the use of his thoughts. They could not keep him at Harrow or at Oxford, because he not only rejected, but would talk openly against, Christian doctrines; a religious boy, but determined not to believe in revealed mysteries. And at twenty-one he declared himself a Republican,—explaining thereby that he disapproved altogether of hereditary honours. He was quite as bad to this Marquis as had been this Marquis to the other. The tailor kept his seat because Lord Hampstead would not even condescend to sit for the family borough. He explained to his father that he had doubts about a Parliament of which one section was hereditary, but was sure that at present he was too young for it. There must surely have been gratification in this to the shade of the departed Marquis.

But there was worse than this,—infinitely worse. Lord Hampstead formed a close friendship with a young man, five years older than himself, who was but a clerk in the Post Office. In George Roden, as a man and a companion, there was no special fault to be found. There may be those who think that a Marquis's heir should look for his most intimate friend in a somewhat higher scale of social rank, and that he would more probably serve the purposes of his future life by associating with his equals;—that like to like in friendship is advantageous....