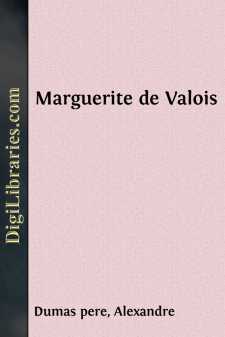 On Monday, the 18th of August, 1572, there was a splendid festival at the Louvre.

The ordinarily gloomy windows of the ancient royal residence were brilliantly lighted, and the squares and streets adjacent, usually so solitary after Saint Germain l'Auxerrois had struck the hour of nine, were crowded with people, although it was past midnight.

The vast, threatening, eager, turbulent throng resembled, in the darkness, a black and tumbling sea, each billow of which makes a roaring breaker; this sea, flowing through the Rue des Fossés Saint Germain and the Rue de l'Astruce and covering the quay, surged against the base of the walls of the Louvre, and, in its refluent tide, against the Hôtel de Bourbon, which faced it on the other side.

In spite of the royal festival, and perhaps even because of the royal festival, there was something threatening in the appearance of the people, for no doubt was felt that this imposing ceremony which called them there as spectators, was only the prelude to another in which they would participate a week later as invited guests and amuse themselves with all their hearts.

The court was celebrating the marriage of Madame Marguerite de Valois, daughter of Henry II. and sister of King Charles IX., with Henry de Bourbon, King of Navarre. In truth, that very morning, on a stage erected at the entrance to Notre-Dame, the Cardinal de Bourbon had united the young couple with the usual ceremonial observed at the marriages of the royal daughters of France.

This marriage had astonished every one, and occasioned much surmise to certain persons who saw clearer than others. They found it difficult to understand the union of two parties who hated each other so thoroughly as did, at this moment, the Protestant party and the Catholic party; and they wondered how the young Prince de Condé could forgive the Duc d'Anjou, the King's brother, for the death of his father, assassinated at Jarnac by Montesquiou. They asked how the young Duc de Guise could pardon Admiral de Coligny for the death of his father, assassinated at Orléans by Poltrot de Méré.

Moreover, Jeanne de Navarre, the weak Antoine de Bourbon's courageous wife, who had conducted her son Henry to the royal marriage awaiting him, had died scarcely two months before, and singular reports had been spread abroad as to her sudden death. It was everywhere whispered, and in some places said aloud, that she had discovered some terrible secret; and that Catharine de Médicis, fearing its disclosure, had poisoned her with perfumed gloves, which had been made by a man named Réné, a Florentine deeply skilled in such matters. This report was the more widely spread and believed when, after this great queen's death, at her son's request, two celebrated physicians, one of whom was the famous Ambroise Paré, were instructed to open and examine the body, but not the skull. As Jeanne de Navarre had been poisoned by a perfume, only the brain could show any trace of the crime (the one part excluded from dissection)....