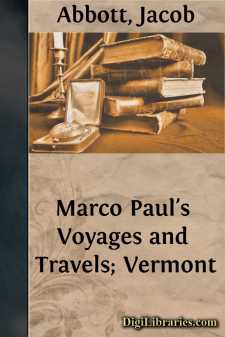 When Mr. Baron, Marco's father, put Marco under his cousin Forester's care, it was his intention that he should spend a considerable part of his time in traveling, and in out-of-door exercises, such as might tend to re-establish his health and strengthen his constitution. He did not, however, intend to have him give up the study of books altogether. Accordingly, at one time, for nearly three months, Marco remained at Forester's home, among the Green Mountains of Vermont, where he studied several hours every day.

It was in the early part of the autumn, that he and Forester went to Vermont. They traveled in the stage-coach. Vermont lies upon one side of the Connecticut river, and New Hampshire upon the other side. The Green Mountains extend up and down, through the middle of Vermont, from north to south, and beyond these mountains, on the western side of the state, is lake Champlain, which extends from north to south also, and forms the western boundary. Thus, the Green Mountains divide the state into two great portions, one descending to the eastward, toward Connecticut river, and the other to the westward, toward lake Champlain. There are, therefore, two great ways of access to Vermont from the states south of it; one up the Connecticut river on the eastern side, and the other along the shores of lake George and lake Champlain on the western side. There are roads across the Green Mountains also, leading from the eastern portion of the state to the western. All this can be seen by looking upon any map of Vermont.

Marco and Forester went up by the Connecticut river. The road lay along upon the bank of the river, and the scenery was very pleasant. They traveled in the stage-coach; for there were very few railroads in those days.

The country was cultivated and fertile, and the prospect from the windows of the coach was very fine. Sometimes wide meadows and intervales extended along the river,--and at other places, high hills, covered with trees, advanced close to the stream. They could see, too, the farms, and villages, and green hills, across the river, on the New Hampshire side.

On the second day of their journey, they turned off from the river by a road which led into the interior of the country; for the village where Forester's father resided was back among the mountains. They had new companions in the coach too, on this second day, as well as a new route; for the company which had been in the coach the day before were to separate in the morning, to go off in different directions. Several stage-coaches drove up to the door of the tavern in the morning, just after breakfast, with the names of the places where they were going to, upon their sides. One was marked, "Haverhill and Lancaster;" another, "Middlebury;" and a third, "Concord and Boston;" and there was one odd-looking vehicle, a sort of carryall, open in front, and drawn by two horses, which had no name upon it, and so Marco could not tell where it was going. As these several coaches and carriages drove up to the door, the hostlers and drivers put on the baggage and bound it down with great straps, and then handed in the passengers;--and thus the coaches, one after another, drove away....