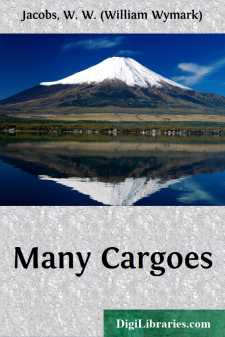 A CHANGE OF TREATMENT

"Yes, I've sailed under some 'cute skippers in my time," said the night-watchman; "them that go down in big ships see the wonders o' the deep, you know," he added with a sudden chuckle, "but the one I'm going to tell you about ought never to have been trusted out without 'is ma. A good many o' my skippers had fads, but this one was the worst I ever sailed under.

"It's some few years ago now; I'd shipped on his barque, the John Elliott, as slow-going an old tub as ever I was aboard of, when I wasn't in quite a fit an' proper state to know what I was doing, an' I hadn't been in her two days afore I found out his 'obby through overhearing a few remarks made by the second mate, who came up from dinner in a hurry to make 'em. 'I don't mind saws an' knives hung round the cabin,' he ses to the fust mate, 'but when a chap has a 'uman 'and alongside 'is plate, studying it while folks is at their food, it's more than a Christian man can stand.'

"'That's nothing,' ses the fust mate, who had sailed with the barque afore. 'He's half crazy on doctoring. We nearly had a mutiny aboard once owing to his wanting to hold a post-mortem on a man what fell from the mast-head. Wanted to see what the poor feller died of.'

"'I call it unwholesome,' ses the second mate very savage.' He offered me a pill at breakfast the size of a small marble; quite put me off my feed, it did.'

"Of course, the skipper's fad soon got known for'ard. But I didn't think much about it, till one day I seed old Dan'l Dennis sitting on a locker reading. Every now and then he'd shut the book, an' look up, closing 'is eyes, an' moving his lips like a hen drinking, an' then look down at the book again.

"He hands over the book, which was stuck full o' all kinds o' diseases, and winks at me 'ard.

"'Picked it up on a book-stall,' he ses; then he shut 'is eyes an' said his piece wonderful. It made me quite queer to listen to 'im. 'That's how I feel,' ses he, when he'd finished. 'Just strength enough to get to bed. Lend a hand, Bill, an' go an' fetch the doctor.'

"Then I see his little game, but I wasn't going to run any risks, so I just mentioned, permiscous like, to the cook as old Dan seemed rather queer, an' went back an' tried to borrer the book, being always fond of reading. Old Dan pretended he was too ill to hear what I was saying, an' afore I could take it away from him, the skipper comes hurrying down with a bag in his 'and.

"'Tell me exactly how you feel,' ses the skipper, feeling his pulse.

"Then old Dan said his piece over to him, an' the skipper shook his head an' looked very solemn.

"'How long have you been like this?' he ses.

"'You lie quite still,' ses the skipper, putting a little trumpet thing to his chest an' then listening....