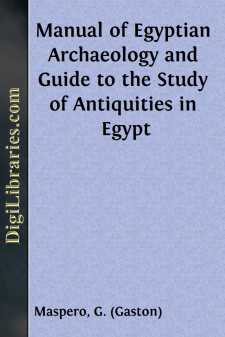 CHAPTER I. ARCHITECTURE--CIVIL AND MILITARY.

Archaeologists, when visiting Egypt, have so concentrated their attention upon temples and tombs, that not one has devoted himself to a careful examination of the existing remains of private dwellings and military buildings. Few countries, nevertheless, have preserved so many relics of their ancient civil architecture. Setting aside towns of Roman or Byzantine date, such as are found almost intact at Koft (Coptos), at Kom Ombo, and at El Agandiyeh, one-half at least of ancient Thebes still exists on the east and south of Karnak. The site of Memphis is covered with mounds, some of which are from fifty to sixty feet in height, each containing a core of houses in good preservation. At Kahûn, the ruins and remains of a whole provincial Twelfth Dynasty town have been laid bare; at Tell el Mask-hûtah, the granaries of Pithom are yet standing; at Sãn (Tanis) and Tell Basta (Bubastis), the Ptolemaic and Saïtic cities contain quarters of which plans might be made (), and in many localities which escape the traveller's notice, there may be seen ruins of private dwellings which date back to the age of the Ramessides, or to a still earlier period. As regards fortresses, there are two in the town of Abydos alone, one of which is at least contemporary with the Sixth Dynasty; while the ramparts of El Kab, of Kom el Ahmar, of El Hibeh, and of Dakkeh, as well as part of the fortifications of Thebes, are still standing, and await the architect who shall deign to make them an object of serious study.

The soil of Egypt, periodically washed by the inundation, is a black, compact, homogeneous clay, which becomes of stony hardness when dry. From immemorial time, the fellahin have used it for the construction of their houses. The hut of the poorest peasant is a mere rudely-shaped mass of this clay. A rectangular space, some eight or ten feet in width, by perhaps sixteen or eighteen feet in length, is enclosed in a wickerwork of palm- branches, coated on both sides with a layer of mud. As this coating cracks in the drying the fissures are filled in, and more coats of mud are daubed on until the walls attain a thickness of from four inches to a foot. Finally, the whole is roofed over with palm-branches and straw, the top being covered in with a thin layer of beaten earth. The height varies. In most huts, the ceiling is so low that to rise suddenly is dangerous both to one's head and to the structure, while in others the roof is six or seven feet from the floor. Windows, of course, there are none. Sometimes a hole is left in the middle of the roof to let the smoke out; but this is a refinement undreamed of by many.

At the first glance, it is not always easy to distinguish between these huts of wattle and daub and those built with crude bricks. The ordinary Egyptian brick is a mere oblong block of mud mixed with chopped straw and a little sand, and dried in the sun....