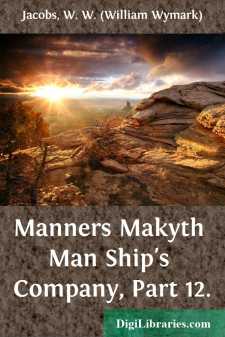 The night-watchman appeared to be out of sorts. His movements were even slower than usual, and, when he sat, the soap-box seemed to be unable to give satisfaction. His face bore an expression of deep melancholy, but a smouldering gleam in his eye betokened feelings deeply moved.

"Play-acting I don't hold with," he burst out, with sudden ferocity. "Never did. I don't say I ain't been to a theayter once or twice in my life, but I always come away with the idea that anybody could act if they liked to try. It's a kid's game, a silly kid's game, dressing up and pretending to be somebody else."

He cut off a piece of tobacco and, stowing it in his left cheek, sat chewing, with his lack-lustre eyes fixed on the wharves across the river. The offensive antics of a lighterman in mid-stream, who nearly fell overboard in his efforts to attract his attention, he ignored.

"I might ha' known it, too," he said, after a long silence. "If I'd only stopped to think, instead o' being in such a hurry to do good to others, I should ha' been all right, and the pack o' monkey-faced swabs on the Lizzie and Annie wot calls themselves sailor-men would 'ave had to 'ave got something else to laugh about. They've told it in every pub for 'arf a mile round, and last night, when I went into the Town of Margate to get a drink, three chaps climbed over the partition to 'ave a look at me.

"It all began with young Ted Sawyer, the mate o' the Lizzie and Annie. He calls himself a mate, but if it wasn't for 'aving the skipper for a brother-in-law 'e'd be called something else, very quick. Two or three times we've 'ad words over one thing and another, and the last time I called 'im something that I can see now was a mistake. It was one o' these 'ere clever things that a man don't forget, let alone a lop-sided monkey like 'im.

"That was when they was up time afore last, and when they made fast 'ere last week I could see as he 'adn't forgotten it. For one thing he pretended not to see me, and, arter I 'ad told him wot I'd do to him if 'e ran into me agin, he said 'e thought I was a sack o' potatoes taking a airing on a pair of legs wot somebody 'ad throwed away. Nasty tongue 'e's got; not clever, but nasty.

"Arter that I took no notice of 'im, and, o' course, that annoyed 'im more than anything. All I could do I done, and 'e was ringing the gate-bell that night from five minutes to twelve till ha'-past afore I heard it. Many a night-watchman gets a name for going to sleep when 'e's only getting a bit of 'is own back.

"We stood there talking for over 'arf-an-hour arter I 'ad let'im in. Leastways, he did. And whenever I see as he was getting tired I just said, 'H'sh!' and 'e'd start agin as fresh as ever. He tumbled to it at last, and went aboard shaking 'is little fist at me and telling me wot he'd do to me if it wasn't for the lor.

"I kept by the gate as soon as I came on dooty next evening, just to give 'im a little smile as 'e went out. There is nothing more aggravating than a smile when it is properly done; but there was no signs o' my lord, and, arter practising it on a carman by mistake, I 'ad to go inside for a bit and wait till he 'ad gorn....