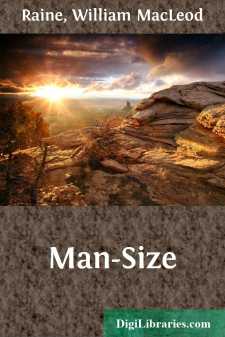 CHAPTER I IN THE DANGER ZONE

She stood on the crown of the hill, silhouetted against a sky-line of deepest blue. Already the sun was sinking in a crotch of the plains which rolled to the horizon edge like waves of a great land sea. Its reflected fires were in her dark, stormy eyes. Its long, slanted rays were a spotlight for the tall, slim figure, straight as that of a boy.

The girl's gaze was fastened on a wisp of smoke rising lazily from a hollow of the crumpled hills. That floating film told of a camp-fire of buffalo chips. There was a little knitted frown of worry on her forehead, for imagination could fill in details of what the coulee held: the white canvas tops of prairie schooners, some spans of oxen grazing near, a group of blatant, profane whiskey-smugglers from Montana, and in the wagons a cargo of liquor to debauch the Bloods and Piegans near Fort Whoop-Up.

Sleeping Dawn was a child of impulse. She had all youth's capacity for passionate indignation and none of the wisdom of age which tempers the eager desire of the hour. These whiskey-traders were ruining her people. More than threescore Blackfeet braves had been killed within the year in drunken brawls among themselves. The plains Indians would sell their souls for fire-water. When the craze was on them, they would exchange furs, buffalo robes, ponies, even their wives and daughters for a bottle of the poison.

In the sunset glow she stood rigid and resentful, one small fist clenched, the other fast to the barrel of the rifle she carried. The evils of the trade came close to her. Fergus McRae still carried the gash from a knife thrust earned in a drunken brawl. It was likely that to-morrow he would cut the trail of the wagon wheels and again make a bee-line for liquor and trouble. The swift blaze of revolt found expression in the stamp of her moccasined foot.

As dusk fell over the plains, Sleeping Dawn moved forward lightly, swiftly, toward the camp in the hollow of the hills. She had no definite purpose except to spy the lay-out, to make sure that her fears were justified. But through the hinterland of her consciousness rebellious thoughts were racing. These smugglers were wholly outside the law. It was her right to frustrate them if she could.

Noiselessly she skirted the ridge above the coulee, moving through the bunch grass with the wary care she had learned as a child in the lodges of the tribe.

Three men crouched on their heels in the glow of a camp-fire well up the draw. A fourth sat at a little distance from them riveting a stirrup leather with two stones. The wagons had been left near the entrance of the valley pocket some sixty or seventy yards from the fire. Probably the drivers, after they had unhitched the teams, had been drawn deeper into the draw to a spot more fully protected from the wind.

While darkness gathered, Sleeping Dawn lay in the bunch grass with her eyes focused on the camp below. Her untaught soul struggled with the problem that began to shape itself. These men were wolfers, desperate men engaged in a nefarious business....