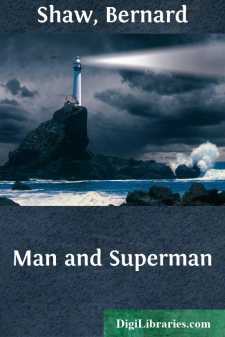 Add to My Favorites
Published: 8 years ago
Downloads: 76
Rating: (0 Votes)

You once asked me why I did not write a Don Juan play. The levity with which you assumed this frightful responsibility has probably by this time enabled you to forget it; but the day of reckoning has arrived: here is your play! I say your play, because qui facit per alium facit per se. Its profits, like its labor, belong to me: its morals, its manners, its philosophy, its influence on the young, are for you to justify. You were of mature age when you made the suggestion; and you knew your man. It is hardly fifteen years since, as twin pioneers of the New Journalism of that time, we two, cradled in the same new sheets, made an epoch in the criticism of the theatre and the opera house by making it a pretext for a propaganda of our own views of life. So you cannot plead ignorance of the character of the force you set in motion. You meant me to epater le bourgeois; and if he protests, I hereby refer him to you as the accountable party.

I warn you that if you attempt to repudiate your responsibility, I shall suspect you of finding the play too decorous for your taste. The fifteen years have made me older and graver. In you I can detect no such becoming change. Your levities and audacities are like the loves and comforts prayed for by Desdemona: they increase, even as your days do grow. No mere pioneering journal dares meddle with them now: the stately Times itself is alone sufficiently above suspicion to act as your chaperone; and even the Times must sometimes thank its stars that new plays are not produced every day, since after each such event its gravity is compromised, its platitude turned to epigram, its portentousness to wit, its propriety to elegance, and even its decorum into naughtiness by criticisms which the traditions of the paper do not allow you to sign at the end, but which you take care to sign with the most extravagant flourishes between the lines. I am not sure that this is not a portent of Revolution. In eighteenth century France the end was at hand when men bought the Encyclopedia and found Diderot there. When I buy the Times and find you there, my prophetic ear catches a rattle of twentieth century tumbrils.

However, that is not my present anxiety. The question is, will you not be disappointed with a Don Juan play in which not one of that hero's mille e tre adventures is brought upon the stage? To propitiate you, let me explain myself. You will retort that I never do anything else: it is your favorite jibe at me that what I call drama is nothing but explanation. But you must not expect me to adopt your inexplicable, fantastic, petulant, fastidious ways: you must take me as I am, a reasonable, patient, consistent, apologetic, laborious person, with the temperament of a schoolmaster and the pursuits of a vestryman. No doubt that literary knack of mine which happens to amuse the British public distracts attention from my character; but the character is there none the less, solid as bricks. I have a conscience; and conscience is always anxiously explanatory. You, on the contrary, feel that a man who discusses his conscience is much like a woman who discusses her modesty. The only moral force you condescend to parade is the force of your wit: the only demand you make in public is the demand of your artistic temperament for symmetry, elegance, style, grace, refinement, and the cleanliness which comes next to godliness if not before it. But my conscience is the genuine pulpit article: it annoys me to see people comfortable when they ought to be uncomfortable; and I insist on making them think in order to bring them to conviction of sin. If you don't like my preaching you must lump it. I really cannot help it.

In the preface to my Plays for Puritans I explained the predicament of our contemporary English drama, forced to deal almost exclusively with cases of sexual attraction, and yet forbidden to exhibit the incidents of that attraction or even to discuss its nature....