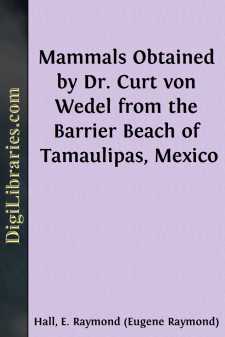 WHAT species of mammals occur on the "coastal island", barrier beach, of Tamaulipas? Are the closest relatives of these mammals on Padre and Mustang islands of Texas, instead of on the mainland of Tamaulipas, or are the mammals on the barrier beach distinct from all others? These were questions that Dr. von Wedel of Oklahoma City and I asked ourselves in March of 1950 when we were in southern Texas. With the aim in mind of answering these questions, Dr. von Wedel arranged round-trip transportation, by air, for the two of us between Brownsville, Texas, and Boca Jesús MarÃ­a. The latter place is a "pass", tidal inlet, through the long barrier beach. The waters of the Gulf of Mexico and of the lagoon behind the beach flow back and forth with the changing tides through the inlet.

We arrived at Boca Jesús MarÃ­a on March 18, 1950, and left on March 22, 1950. Our headquarters there were in one of the four one-story buildings immediately north of the inlet. This place is approximately 89½ miles south, and 10 miles west, of Matamoros, Mexico. Most of our collecting was done on the sand dunes one and one-half miles north of the buildings but on the evening of March 20 we made a round-trip, by boat of course, to the sand dunes on the south side of the inlet to set traps; these traps, and the Dipodomys that were caught in them, were picked up the following morning.

At the time of our visit, the part of the barrier beach south of the tidal inlet was connected with the mainland. The connection was far to the southward, according to our pilot, Mr. Kagy of Brownsville, and also according to the testimony of the Mexicans at the fishing camp where we stayed on the north side of the inlet. The barrier beach which lay to the north of the inlet extended sixty-odd miles northward to the delta of the RÃ­o Grande and had, we were told, eight "passes," including Paso Jesús MarÃ­a. At the time of our visit, however, only three of these tidal inlets were open, it was said; the five others were thought to be filled in with sand, which permitted terrestrial animals to move from one part of the beach to another. Dr. von Wedel and I saw two tidal inlets that were open when we were being flown back to Brownsville.

Fig. 1. Diagram of physiographic features of the barrier beach of Tamaulipas. Top view looking down, as from an airplane, on the beach. Bottom view is profile.

The long, low, sandy island, technically a barrier beach, irrespective of tide varied in width from a quarter of a mile to as much as a mile and was separated from the mainland by the Laguna Madre, which was four miles wide opposite our trapping station. To the northward the width of the lagoon gradually increased until, at a place thirty miles north of our trapping station, the lagoon was almost 20 miles wide.

The island was perhaps four feet above high tide. Superimposed on this, in places, there were sand dunes, technically barchans, so arranged that the end of one touched the end of the next. The tops of some were as much as 20 feet above high tides and the chain of these connected-dunes on which we trapped was approximately a mile long. Incipient tidal inlets were frequent; they were where storm-driven waves of high tides had broken across the island between the adjacent ends of two dunes. The windward side of a dune was toward the Gulf and the slope of that side was gentler than that on the leeward side. According to the cycle described by Davis (Proc. Amer. Acad. Arts and Sciences, 22:303–332, 1896) and recently figured on page 364 by Lobeck (Geomorphology, 1st ed., xii + 731 pp., 1939, McGraw Hill Book Co., Inc., New York) the barrier beach concerned was in the early part of the "Middle Youth Stage".

Typically, on the center of the area in the lee of a dune there was a patch of plum brush, almost five feet tall and so dense that a person could not penetrate it....