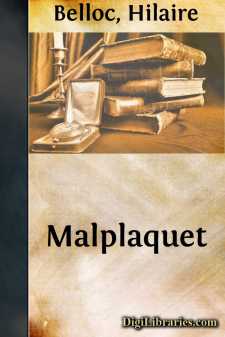 THE POLITICAL MEANING OF MALPLAQUET

That political significance which we must seek in all military history, and without which that history cannot be accurate even upon its technical side, may be stated for the battle of Malplaquet in the following terms.

Louis XIV. succeeding to a cautious and constructive period in the national life of France, this in its turn succeeding to the long impotence of the religious wars, found at his orders when his long minority was ended a society not only eager and united, but beginning also to give forth the fruit due to three active generations of discussion and combat.

Every department of the national life manifested an extreme vitality, and, while the orderly and therefore convincing scheme of French culture imposed itself upon Western Europe, there followed in its wake the triumph of French arms; the king in that triumph nearly perfected a realm which would have had for its limits those of ancient Gaul.

It would be too long a matter to describe, even in general terms, the major issues depending upon Louis XIV.’s national ambitions and their success or failure.

In one aspect he stands for the maintenance of Catholic civilisation against the Separatist and dissolving forces of the Protestant North; in another he is the permanent antagonist of the Holy Roman Empire, or rather of the House of Austria, which had attained to a permanent hegemony therein. An extravagant judgment conceives his great successes as a menace to the corporate independence of Europe, or—upon the other view—as the opportunity for the founding of a real European unity.

But all these general considerations may, for the purposes of military history, be regarded in the single light of the final and decisive action which Louis XIV. took when he determined in the year 1701 to support the claims of his young grandson to the throne of Spain. This it was which excited against him a universal coalition, and acts following upon that main decision drew into the coalition the deciding factor of Great Britain.

The supremacy of French arms had endured in Europe for forty years when the Spanish policy was decided on. Louis was growing old. That financial exhaustion which almost invariably follows a generation of high national activity, and which is almost invariably masked by pompous outward state, was a reality already present though as yet undiscovered in the condition of France.

It was at the close of that year 1701 that the French king had determined upon a union of the two crowns of France and Spain in his own family. His forces occupied the Spanish Netherlands, which we now call the Kingdom of Belgium; others of his armies were spread along the Rhine, or were acting in Northern Italy—for the coalition at once began to make itself felt. Two men of genius combined in an exact agreement, the qualities of each complementing the defects of the other, to lead the main armies that were operating against the French. These men were Prince Eugene of Savoy (French by birth and training, a voluntary exile, and inspired throughout his life by a determination to avenge himself upon Louis XIV.), and the Englishman John Churchill, Duke of Marlborough.

The combination of such a pair was irresistible....