Makers of Many Things 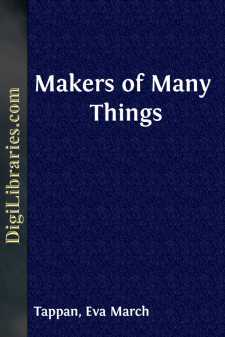 I remember being once upon a time ten miles from a store and one mile from a neighbor; the fire had gone out in the night, and the last match failed to blaze. We had no flint and steel. We were neither Indians nor Boy Scouts, and we did not know how to make a fire by twirling a stick. There was nothing to do but to trudge off through the snow to the neighbor a mile away and beg some matches. Then was the time when we appreciated the little match and thought with profound respect of the men who invented and perfected it.

It is a long way from the safe and reliable match of to-day back to the splinters that were soaked in chemicals and sold together with little bottles of sulphuric acid. The splinter was expected to blaze when dipped into the acid. Sometimes it did blaze, and sometimes it did not; but it was reasonably certain how the acid would behave, for it would always sputter and do its best to spoil some one's clothes. Nevertheless, even such matches as these were regarded as a wonderful convenience, and were sold at five dollars a hundred. With the next kind of match that appeared, a piece of folded sandpaper was sold, and the buyer was told to pinch it hard and draw the match through the fold. These matches were amazingly cheap—eighty-four of them for only twenty-five cents! There have been all sorts of odd matches. One kind actually had a tiny glass ball at the end full of sulphuric acid. To light this, you had to pinch the ball and the acid that was thus let out acted upon the other chemicals on the match and kindled it—or was expected to kindle it, which was not always the same thing.

Making matches is a big business, even if one hundred of them are sold for a cent. It is estimated that on an average each person uses seven matches every day. To provide so many would require some seven hundred million matches a day in this country alone. It seems like a very simple matter to cut a splinter of wood, dip it into some chemicals, and pack it into a box for sale; and it would be simple if it were all done by hand, but the matches would also be irregular and extremely expensive. The way to make anything cheap and uniform is to manufacture it by machinery.

THE ENDLESS MATCH MACHINEThe match splints are set in tiny holes like pins in a pincushion, and the belt revolves, passing their heads through various chemicals.

The first step in making matches is to select some white-pine plank of good quality and cut it into blocks of the proper size. These are fed into a machine which sends sharp dies through them and thus cuts the match splints. Over the splint cutter a carrier chain is continuously moving, and into holes [3] in this chain the ends of the match splints are forced at the rate of ten or twelve thousand a minute.

The splints remain in the chain for about an hour, and during this hour all sorts of things happen to them. First, they are dipped into hot paraffin wax, because this will light even more easily than wood. As soon as the wax is dry, the industrious chain carries them over a dipping-roll covered with a layer consisting partly of glue and rosin....