Makers of Madness A Play in One Act and Three Scenes 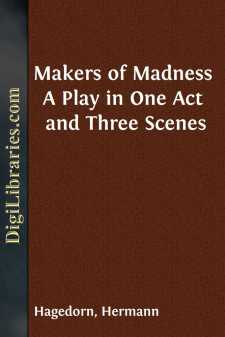 A room in the Ministry of War in the capital of Iberia.

The minister of war, a tall, stern, bearded man with deep-set eyes and many furrows, is sitting at a large, mahogany desk-table, Left.

The chief of staff, silent, motionless and watchful, stands beside him with his hands resting on the table-top. He is thin, old and emaciated, clean-shaven, firm-lipped, and looks startlingly like a bird of prey. Right, stands a group of generals and other officers.

[Rising and speaking in a sharp, crisp bass voice.

I can only repeat, gentlemen, what his Excellency, the Chief of Staff, has already made clear to you. Nothing has been decided. You have your orders in your pockets. There may be war and there may not be war. I understand, gentlemen, your natural impatience once more to draw the naked steel for the glory of our country, and you may rest assured that his gracious majesty, the King, will not forget that his fame and the happiness of his people rests ultimately in your hands. Personally, as a man of family and as a Christian, I hope to God that peace may be preserved. But if God wills that our enemy, by his insolence, forces us to draw the sword, I know that you will wield it with honor and will not sheathe it until our enemy is crushed, root and branch, stock and barrel, and brought so low that he will never raise his head again in dishonorable defiance of our holy rights.

[The officers shout with enthusiasm, lifting their helmets in air. The minister of war sits down again.

That is all, gentlemen.

[With a grim smile.

But I recommend that you do not send your service uniforms to the tailor tonight. You may have need of them.

[There is another cheer. The officers stand about in groups a minute or so, then file out through the double-door in the centre of the rear wall. One elderly general, only, comes up quickly to the desk.

[In a rasping voice, to the chief of staff.

Delay again? Aren't we ever going to get at their throats?

We are ready. But the King!

[He shrugs his shoulders.

The peace propagandists are after him. Mediation is the magic word. Mediation—by which the neutral nations block our legitimate road to victory for their own benefit, in the name of civilization and progress.

Give me a sword in my right hand again, I say! I'll break open a few skulls yet, for all my sixty years. Eh? Mediation! Let those mediate, I say, who are afraid to fight!

We are not mediating yet. You may tell that to your friends if they become downhearted.

To command, your Excellency! It is good that some one looks out for the honor of the army.

[The minister of war half rises and bows slightly. The chief of staff nods. Exit the general.

[With a flash in his old eyes.

Ha! Once more to have those fellows behind me. Think of it! Each man of them represents fifty thousand....