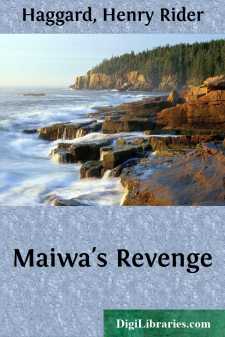 One day—it was about a week after Allan Quatermain told me his story of the "Three Lions," and of the moving death of Jim-Jim—he and I were walking home together on the termination of a day's shooting. He owned about two thousand acres of shooting round the place he had bought in Yorkshire, over a hundred of which were wood. It was the second year of his occupation of the estate, and already he had reared a very fair head of pheasants, for he was an all-round sportsman, and as fond of shooting with a shot-gun as with an eight-bore rifle. We were three guns that day, Sir Henry Curtis, Old Quatermain, and myself; but Sir Henry was obliged to leave in the middle of the afternoon in order to meet his agent, and inspect an outlying farm where a new shed was wanted. However, he was coming back to dinner, and going to bring Captain Good with him, for Brayley Hall was not more than two miles from the Grange.

We had met with very fair sport, considering that we were only going through outlying cover for cocks. I think that we had killed twenty-seven, a woodcock and a leash of partridges which we secured out of a driven covey. On our way home there lay a long narrow spinney, which was a very favourite "lie" for woodcocks, and generally held a pheasant or two as well.

"Well, what do you say?" said old Quatermain, "shall we beat through this for a finish?"

I assented, and he called to the keeper who was following with a little knot of beaters, and told him to beat the spinney.

"Very well, sir," answered the man, "but it's getting wonderful dark, and the wind's rising a gale. It will take you all your time to hit a woodcock if the spinney holds one."

"You show us the woodcocks, Jeffries," answered Quatermain quickly, for he never liked being crossed in anything to do with sport, "and we will look after shooting them."

The man turned and went rather sulkily. I heard him say to the under-keeper, "He's pretty good, the master is, I'm not saying he isn't, but if he kills a woodcock in this light and wind, I'm a Dutchman."

I think that Quatermain heard him too, though he said nothing. The wind was rising every minute, and by the time the beat begun it blew big guns. I stood at the right-hand corner of the spinney, which curved round somewhat, and Quatermain stood at the left, about forty paces from me. Presently an old cock pheasant came rocketing over me, looking as though the feathers were being blown out of his tail. I missed him clean with the first barrel, and was never more pleased with myself in my life than when I doubled him up with the second, for the shot was not an easy one. In the faint light I could see Quatermain nodding his head in approval, when through the groaning of the trees I heard the shouts of the beaters, "Cock forward, cock to the right." Then came a whole volley of shouts, "Woodcock to the right," "Cock to the left," "Cock over."

I looked up, and presently caught sight of one of the woodcocks coming down the wind upon me like a flash....