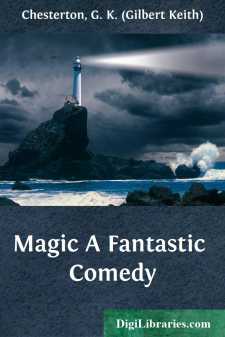 Add to My Favorites
Published: 8 years ago
Downloads: 59
Rating: (0 Votes)

Scene: A plantation of thin young trees, in a misty and rainy twilight; some woodland blossom showing the patches on the earth between the stems.

The Stranger is discovered, a cloaked figure with a pointed hood. His costume might belong to modern or any other time, and the conical hood is so drawn over the head that little can be seen of the face.

A distant voice, a woman's, is heard, half-singing, half-chanting, unintelligible words. The cloaked figure raises its head and listens with interest. The song draws nearer and Patricia Carleon enters. She is dark and slight, and has a dreamy expression. Though she is artistically dressed, her hair is a little wild. She has a broken branch of some flowering tree in her hand. She does not notice the stranger, and though he has watched her with interest, makes no sign. Suddenly she perceives him and starts back.

Patricia. Oh! Who are you?

Stranger. Ah! Who am I? [Commences to mutter to himself, and maps out the ground with his staff.]

Stranger. It is the language of the fairies, O daughter of Eve.

Patricia. But I never thought fairies were like you. Why, you are taller than I am.

Stranger. We are of such stature as we will. But the elves grow small, not large, when they would mix with mortals.

Patricia. You mean they are beings greater than we are.

Stranger. Daughter of men, if you would see a fairy as he truly is, look for his head above all the stars and his feet amid the floors of the sea. Old women have taught you that the fairies are too small to be seen. But I tell you the fairies are too mighty to be seen. For they are the elder gods before whom the giants were like pigmies. They are the Elemental Spirits, and any one of them is larger than the world. And you look for them in acorns and on toadstools and wonder that you never see them.

Patricia. But you come in the shape and size of a man?

Stranger. Because I would speak with a woman.

Patricia. [Drawing back in awe.] I think you are growing taller as you speak.

[The scene appears to fade away, and give place to the milieu of Act One, the Duke's drawing-room, an apartment with open French windows or any opening large enough to show a garden and one house fairly near. It is evening, and there is a red lamp lighted in the house beyond. The Rev. Cyril Smith is sitting with hat and umbrella beside him, evidently a visitor. He is a young man with the highest of High Church dog-collars and all the qualities of a restrained fanatic. He is one of the Christian Socialist sort and takes his priesthood seriously. He is an honest man, and not an ass.

[To him enters Mr. Hastings with papers in his hand.

Hastings. Oh, good evening. You are Mr. Smith. [Pause.] I mean you are the Rector, I think.

Smith. I am the Rector.

Hastings. I am the Duke's secretary. His Grace asks me to say that he hopes to see you very soon; but he is engaged just now with the Doctor....