Made to Measure Deep Waters, Part 3. 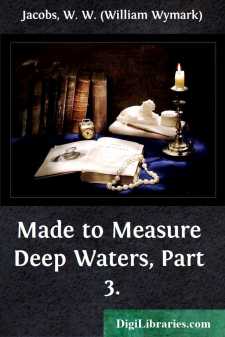 Mr. Mott brought his niece home from the station with considerable pride. Although he had received a photograph to assist identification, he had been very dubious about accosting the pretty, well-dressed girl who had stepped from the train and gazed around with dove-like eyes in search of him. Now he was comfortably conscious of the admiring gaze of his younger fellow-townsmen.

"You'll find it a bit dull after London, I expect," he remarked, as he inserted his key in the door of a small house in a quiet street.

"I hope you'll stay a long time," he said, as he led the way into the small front room. "I'm a lonely old man."

His niece sank into an easy chair, and looked about her.

"Thank you," she said, slowly. "I hope I shall. I feel better already. There is so much to upset one in London."

"And other things," said Miss Garland, with a slight shudder.

Mr. Mott sighed in sympathy with the unknown, and, judging by his niece's expression, the unknowable. He rearranged the teacups, and, going to the kitchen, returned in a few minutes with a pot of tea.

"Mrs. Pett leaves at three," he said, in explanation, "to look after her children, but she comes back again at eight to look after my supper. And how is your mother?"

"Last letter I had from her," said Mr. Mott, stealing a glance at the girl's ring-finger, "I understood you were engaged."

His niece drew herself up.

"Certainly not," she said, with considerable vigour. "I have seen too much of married life. I prefer my freedom. Besides, I don't like men."

Mr. Mott said modestly that he didn't wonder at it, and, finding the subject uncongenial, turned the conversation on to worthier subjects. Miss Garland's taste, it seemed, lay in the direction of hospital nursing, or some other occupation beneficial to mankind at large. Simple and demure, she filled the simpler Mr. Mott with a strong sense of the shortcomings of his unworthy sex.

Within two days, under the darkling glance of Mrs. Pett, she had altered the arrangements of the house. Flowers appeared on the meal-table, knives and forks were properly cleaned, and plates no longer appeared ornamented with the mustard of a previous meal. Fresh air circulated through the house, and, passing from Mrs. Pett's left knee to the lumbar region of Mr. Mott, went on its beneficent way rejoicing.

On the fifth day of her visit, Mr. Mott sat alone in the front parlour. The window was closed, the door was closed, and Mr. Mott, sitting in an easy chair with his feet up, was aroused from a sound nap by the door opening to admit a young man, who, deserted by Mrs. Pett, stood bowing awkwardly in the doorway.

"Is Miss Garland in?" he stammered.

Mr. Mott rubbed the remnants of sleep from his eyelids.