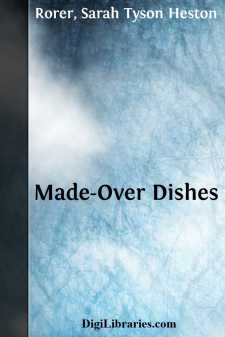 Cold boiled fish makes excellent canapés. To each half pint of fish allow six squares of toasted bread. If you have any cold boiled potatoes left over, add milk to them, make them hot and put them into a pastry bag. Decorate the edge of the toast with these mashed potatoes, using a small star tube; put them back in the oven until light brown. Make the fish into a creamed fish. Rub the butter and flour together, add a half pint of milk, add the fish and a palatable seasoning of salt and pepper. Dish the centers on top of the toast with this creamed fish and send at once to the table. A very little fish here makes a good showing, and is one of the nicest of the hot canapés.

After sardines have once been opened it is best to remove them from the can and make them into some dish for the next meal. They may be broiled and served on toast, or made with bread crumbs into sardine balls and fried, or baked. To bake them, stir the oil from the can into a half cupful of water, add a teaspoonful of Worcestershire sauce, a half teaspoonful of salt and a dash of pepper. Put the fish into a baking pan, run them into the oven until very hot, then dish them, baste them with the sauce and send them at once to the table.

Any cold boiled fish that is left over may be made into croquettes. To each cupful of the cold fish allow one level tablespoonful of butter, two level tablespoonfuls of flour and a half cupful of milk. Rub the butter and flour together, add the milk; when boiling take from the fire. Add to the fish a level teaspoonful of salt, a dash of black pepper, a tablespoonful of chopped parsley and a few drops of onion juice; mix this carefully with the paste and turn out to cool. When cold, form into small cylinders, dip in beaten egg and fry in deep hot fat.

One pint of cold boiled fish, mixed with a half pint of white sauce. Turn this into a baking dish and brown. Or when the two are carefully heated together, serve in either ramekin dishes or in a border of browned mashed potatoes.

As meat is the most costly and extravagant of all articles of food, it behooves the housewife to save all left-overs and work them over into other dishes. The so-called inferior pieces—not inferior because they contain less nourishment, but inferior because the demand for such meat is less—should be used for all dishes that are chopped before cooking, as Hamburg steaks, curry balls, kibbee, or for stews, ragouts, pot roasts and various dishes where a sauce is used to hide the inferiority and ugliness of the dish. We have no occasion here to spend money on good looks.

If one purchases meat for soup, the leg and shin are the better parts. This, however, is not necessary in the ordinary family, as there are always sufficient bones left over for daily stock. All meat left over from beef tea, tasteless as it is, may be nicely seasoned and made into curries or into pressed meat, giving again a nice dish for lunch or supper....