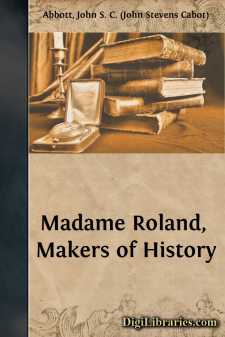 Many characters of unusual grandeur were developed by the French Revolution. Among them all, there are few more illustrious, or more worthy of notice, than that of Madame Roland. The eventful story of her life contains much to inspire the mind with admiration and with enthusiasm, and to stimulate one to live worthily of those capabilities with which every human heart is endowed. No person can read the record of her lofty spirit and of her heroic acts without a higher appreciation of woman's power, and of the mighty influence one may wield, who combines the charms of a noble and highly-cultivated mind with the fascinations of female delicacy and loveliness. To understand the secret of the almost miraculous influence she exerted, it is necessary to trace her career, with some degree of minuteness, from the cradle to the hour of her sublime and heroic death.

In the year 1754, there was living, in an obscure workshop in Paris, on the crowded Quai des Orfevres, an engraver by the name of Gratien Phlippon. He had married a very beautiful woman, whose placid temperament and cheerful content contrasted strikingly with the restlessness and ceaseless repinings of her husband. The comfortable yet humble apartments of the engraver were over the shop where he plied his daily toil. He was much dissatisfied with his lowly condition in life, and that his family, in the enjoyment of frugal competence alone, were debarred from those luxuries which were so profusely showered upon others. Bitterly and unceasingly he murmured that his lot had been cast in the ranks of obscurity and of unsparing labor, while others, by a more fortunate, although no better merited destiny, were born to ease and affluence, and honor and luxury. This thought of the unjust inequality in man's condition, which soon broke forth with all the volcanic energy of the French Revolution, already began to ferment in the bosoms of the laboring classes, and no one pondered these wide diversities with a more restless spirit, or murmured more loudly and more incessantly than Phlippon. When the day's toil was ended, he loved to gather around him associates whose feelings harmonized with his own, and to descant upon their own grievous oppression and upon the arrogance of aristocratic greatness. With an eloquence which often deeply moved his sympathizing auditory, and fanned to greater intensity the fires which were consuming his own heart, he contrasted their doom of sleepless labor and of comparative penury with the brilliance of the courtly throng, living in idle luxury, and squandering millions in the amusements at Versailles, and sweeping in charioted splendor through the Champs Elysée.

His hostility to the Church.Origin of the French Revolution.

Phlippon was a philosopher, not a Christian. Submission was a virtue he had never learned, and never wished to learn....