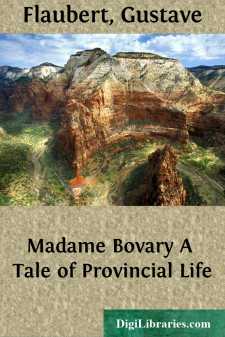 Domi mansit, lanam fecit: "He remained at home and wrote," is the first thing that should be said of Gustave Flaubert. This trait, which he shares with many of the writers of his generation,—Renan, Taine, Leconte de Lisle and Dumas fils,—distinguishes them and distinguishes him from those of the preceding generation, who voluntarily sought inspiration in disorder and agitation,—Balzac and George Sand, for instance (to speak only of romance writers), and the elder Dumas or Eugène Sue. Flaubert, indeed, had no "outward life;" he lived only for his art.

A second trait of his character, and of his genius as a writer, is that of seeing in his art only the art itself—and art alone, without the mingling of any vision of fortune or success. A competency,—which he had inherited from the great surgeon, his father,—and moderate tastes, infinitely more bourgeois than his literature,—permitted him to shun the great stumbling-block of the professional man of letters, which, in our day, and doubtless in the United States as well as in France, is the temptation to coin money with the pen. Never was writer more disinterested than Flaubert; and the story is that Madame Bovary brought him 300 francs—in debts.

A third trait, which helps not only to characterise but to individualise him, is his subordination not only of his own existence, but of life in general, to his conception of art. It is not enough to say that he lived for his art: he saw nothing in the world or in life but material for that art,—Hostis quid aliud quam perpetua materia gloriæ?—and if it be true that others have died of their ambition, it could literally be said of Flaubert that he was killed by his art.

It is this point that I should like to bring out in this Introduction,—where we need not speak of his Norman origin, or (as his friend Ducamp has written in his Literary Souvenirs with a disagreeable persistence, and so uselessly!) of his nervousness and epilepsy; of his loves or his friendships, but solely of his work. We know, in fact, to-day, that if all such details are made clear in the biography of a great writer, in no way do they explain his work. The author of Gil Blas, Alain René Lesage, was a Breton, like the author of Atala; the Corneille brothers had almost nothing in common. Of all our great writers, the one nearest, perhaps, to Jean-Jacques Rousseau, who died a victim to delirium from persecution, was Madame Sand, who had, without doubt, the sanest and best balanced temperament.

Other writers have sought,—for instance, our great classical authors, Pascal, Bossuet and perhaps Corneille,—to influence the thought of their time; some, like Molière, La Fontaine, and La Bruyère, to correct customs. Others still,—such as our romantic writers, Hugo or De Musset,—desired only to express their personal conception of the world and of life. And then Balzac, whose object,—almost scientific,—was to make a "natural history," a study and description, of the social species, as an animal or vegetable species is described in zoology or botany....