Lysbeth, a Tale of the Dutch 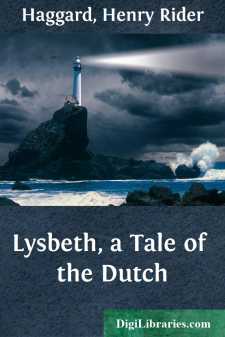 CHAPTER I THE WOLF AND THE BADGER

The time was in or about the year 1544, when the Emperor Charles V. ruled the Netherlands, and our scene the city of Leyden.

Any one who has visited this pleasant town knows that it lies in the midst of wide, flat meadows, and is intersected by many canals filled with Rhine water. But now, as it was winter, near to Christmas indeed, the meadows and the quaint gabled roofs of the city lay buried beneath a dazzling sheet of snow, while, instead of boats and barges, skaters glided up and down the frozen surface of the canals, which were swept for their convenience. Outside the walls of the town, not far from the Morsch poort, or gate, the surface of the broad moat which surrounded them presented a sight as gay as it was charming. Just here one of the branches of the Rhine ran into this moat, and down it came the pleasure-seekers in sledges, on skates, or afoot. They were dressed, most of them, in their best attire, for the day was a holiday set apart for a kind of skating carnival, with sleighing matches, such games as curling, and other amusements.

Among these merry folk might have been seen a young lady of two or three and twenty years of age, dressed in a coat of dark green cloth trimmed with fur, and close-fitting at the waist. This coat opened in front, showing a broidered woollen skirt, but over the bust it was tightly buttoned and surmounted by a stiff ruff of Brussels lace. Upon her head she wore a high-crowned beaver hat, to which the nodding ostrich feather was fastened by a jewelled ornament of sufficient value to show that she was a person of some means. In fact, this lady was the only child of a sea captain and shipowner named Carolus van Hout, who, whilst still a middle-aged man, had died about a year before, leaving her heiress to a very considerable fortune. This circumstance, with the added advantages of a very pretty face, in which were set two deep and thoughtful grey eyes, and a figure more graceful than was common among the Netherlander women, caused Lysbeth van Hout to be much sought after and admired, especially by the marriageable bachelors of Leyden.

On this occasion, however, she was unescorted except by a serving woman somewhat older than herself, a native of Brussels, Greta by name, who in appearance was as attractive as in manner she was suspiciously discreet.

As Lysbeth skated down the canal towards the moat many of the good burghers of Leyden took off their caps to her, especially the young burghers, one or two of whom had hopes that she would choose them to be her cavalier for this day's fete. Some of the elders, also, asked her if she would care to join their parties, thinking that, as she was an orphan without near male relations, she might be glad of their protection in times when it was wise for beautiful young women to be protected. With this excuse and that, however, she escaped from them all, for Lysbeth had already made her own arrangements.

At that date there was living in Leyden a young man of four or five and twenty, named Dirk van Goorl, a distant cousin of her own....