Lyrics from the Song-Books of the Elizabethan Age

by A. H. (Arthur Henry) Bullen 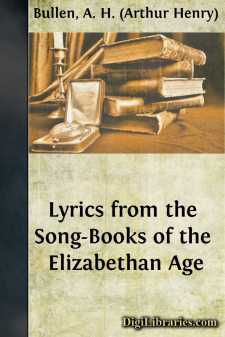 The present Anthology is intended to serve as a companion volume to the Poetical Miscellanies published in England at the close of the sixteenth and the beginning of the seventeenth centuries. A few of the lyrics here collected are, it is true, included in “England’s Helicon,” Davison’s “Poetical Rhapsody,” and “The Phœnix’ Nest”; and some are to be found in the modern collections of Oliphant, Collier, Rimbault, Mr. W.J. Linton, Canon Hannah, and Professor Arber. But many of the poems in the present volume are, I have every reason to believe, unknown even to those who have made a special study of Elizabethan poetry. I have gone carefully through all the old song-books preserved in the library of the British Museum, and I have given extracts from two books of which there is no copy in our national library. A first attempt of this kind must necessarily be imperfect. Were I to go over the ground again I should enlarge the collection, and I should hope to gain tidings of some song-books (mentioned by bibliographers) which I have hitherto been unable to trace.

In Elizabeth’s days composers were not content to regard the words of a song as a mere peg on which to hang the music, but sought the services of true-born lyrists. It is not too much to say that, for delicate perfection of form, some of the Elizabethan songs can compare with the choicest epigrams in the Greek Anthology. At least one composer, Thomas Campion, wrote both the words and the music of his songs; and there are no sweeter lyrics in English poetry than are to be found in Campion’s song-books. But it may be assumed that, as a rule, the composers are responsible only for the music.

It was in the year of the Spanish Armada, 1588, that William Byrd published “Psalms, Sonnets, and Songs of Sadness and Piety,” the first Elizabethan song-book of importance. Few biographical particulars concerning Byrd have come down. As he was senior chorister of St. Paul’s in 1554, he is conjectured to have been born about 1538. From 1563 to 1569 he was organist of Lincoln Cathedral. He and Tallis were granted a patent, which must have proved fairly lucrative, for the printing of music and the vending of music-paper. In later life he appears to have become a convert to Romanism. His last work was published in 1611, and he died at a ripe old age on the 24th of July, 1623. The “Psalms, Sonnets, and Songs” are dedicated to Sir Christopher Hatton. In the dedicatory epistle he terms the collection “this first printed work of mine in English;” in 1575 he had published with Tallis “Cantiones Sacræ.” From the title one would gather that Byrd’s first English collection was mainly of a sacred character, but in an epistle to the reader he hastens to set us right on that point:—“Benign reader, here is offered unto thy courteous acceptance music of sundry sorts, and to content divers humours. If thou be disposed to pray, here are psalms; if to be merry, here are sonnets.” There is, indeed, fare for all comers; and a reader has only himself to blame if he goes away dissatisfied. In those days, as in these, it was not uncommon for a writer to attribute all faults, whether of omission or commission, to the luckless printer. Byrd, on the other hand, solemnly warns us that “in the expression of these songs either by voices or instruments, if there be any jar or dissonance,” we are not to blame the printer, who has been at the greatest pains to secure accuracy. Then the composer makes a modest appeal on behalf of himself, requesting those who find any fault in the composition “either with courtesy to let the same be concealed,” or “in friendly sort” point out the errors, which shall be corrected in a future impression. This is the proper manner of dealing between gentlemen. His next publication was “Songs of Sundry Natures,” 1589, which was dedicated to Sir Henry Carey, who seems to have been as staunch a patron of Byrd as his son, Sir George Carey, was of Dowland. In 1611 appeared Byrd’s last work, “Psalms, Songs, and Sonnets.” The composer must have taken to heart the precepts set down by Sir Edward Dyer in “My mind to me a kingdom is,” (printed in “Psalms, Sonnets, and Songs”) for his dedicatory epistle and his address to the reader show him to have been a man who had laid up a large store of genial wisdom, upon which he could draw freely in the closing days of an honourable life....