Lyrical Ballads with Other Poems, 1800, Volume 2 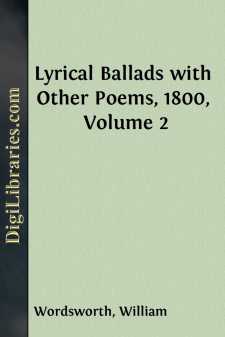 Hart-Leap Well is a small spring of water, about five miles from Richmond in Yorkshire, and near the side of the road which leads from Richmond to Askrigg. Its name is derived from a remarkable chase, the memory of which is preserved by the monuments spoken of in the second Part of the following Poem, which monuments do now exist as I have there described them.

The Knight had ridden down from Wensley moor  With the slow motion of a summer's cloud;  He turn'd aside towards a Vassal's door,  And, "Bring another Horse!" he cried aloud.

"Another Horse!"—That shout the Vassal heard,  And saddled his best steed, a comely Grey;  Sir Walter mounted him; he was the third  Which he had mounted on that glorious day.

Joy sparkeled in the prancing Courser's eyes;  The horse and horsemen are a happy pair;  But, though Sir Walter like a falcon flies,  There is a doleful silence in the air.

A rout this morning left Sir Walter's Hall,  That as they gallop'd made the echoes roar;  But horse and man are vanish'd, one and all;  Such race, I think, was never seen before.

Sir Walter, restless as a veering wind,  Calls to the few tired dogs that yet remain:  Brach, Swift and Music, noblest of their kind,  Follow, and weary up the mountain strain.

The Knight halloo'd, he chid and cheer'd them on  With suppliant gestures and upbraidings stern;  But breath and eye-sight fail, and, one by one,  The dogs are stretch'd among the mountain fern.

Where is the throng, the tumult of the chace?  The bugles that so joyfully were blown?  —This race it looks not like an earthly race;  Sir Walter and the Hart are left alone.

The poor Hart toils along the mountain side;  I will not stop to tell how far he fled,  Nor will I mention by what death he died;  But now the Knight beholds him lying dead.

Dismounting then, he lean'd against a thorn;  He had no follower, dog, nor man, nor boy:  He neither smack'd his whip, nor blew his horn,  But gaz'd upon the spoil with silent joy.

Close to the thorn on which Sir Walter lean'd,  Stood his dumb partner in this glorious act;  Weak as a lamb the hour that it is yean'd,  And foaming like a mountain cataract.

Upon his side the Hart was lying stretch'd:  His nose half-touch'd a spring beneath a hill,  And with the last deep groan his breath had fetch'd  The waters of the spring were trembling still.

And now, too happy for repose or rest,  Was never man in such a joyful case,  Sir Walter walk'd all round, north, south and west,  And gaz'd, and gaz'd upon that darling place.

And turning up the hill, it was at least  Nine roods of sheer ascent, Sir Walter found  Three several marks which with his hoofs the beast  Had left imprinted on the verdant ground.

Sir Walter wiped his face, and cried, "Till now  Such sight was never seen by living eyes:  Three leaps have borne him from this lofty brow,  Down to the very fountain where he lies."

I'll build a Pleasure-house upon this spot,  And a small Arbour, made for rural joy;  Twill be the traveller's shed, the pilgrim's cot,  A place of love for damsels that are coy....