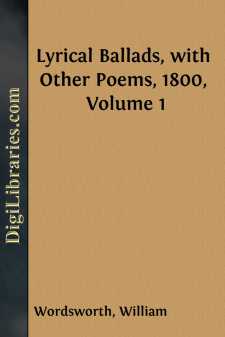 The First Volume of these Poems has already been submitted to general perusal. It was published, as an experiment which, I hoped, might be of some use to ascertain, how far, by fitting to metrical arrangement a selection of the real language of men in a state of vivid sensation, that sort of pleasure and that quantity of pleasure may be imparted, which a Poet may rationally endeavour to impart.

I had formed no very inaccurate estimate of the probable effect of those Poems: I flattered myself that they who should be pleased with them would read them with more than common pleasure: and on the other hand I was well aware that by those who should dislike them they would be read with more than common dislike. The result has differed from my expectation in this only, that I have pleased a greater number, than I ventured to hope I should please.

For the sake of variety and from a consciousness of my own weakness I was induced to request the assistance of a Friend, who furnished me with the Poems of the ANCIENT MARINER, the FOSTER-MOTHER'S TALE, the NIGHTINGALE, the DUNGEON, and the Poem entitled LOVE. I should not, however, have requested this assistance, had I not believed that the poems of my Friend would in a great measure have the same tendency as my own, and that, though there would be found a difference, there would be found no discordance in the colours of our style; as our opinions on the subject of poetry do almost entirely coincide.

Several of my Friends are anxious for the success of these Poems from a belief, that if the views, with which they were composed, were indeed realized, a class of Poetry would be produced, well adapted to interest mankind permanently, and not unimportant in the multiplicity and in the quality of its moral relations: and on this account they have advised me to prefix a systematic defence of the theory, upon which the poems were written. But I was unwilling to undertake the task, because I knew that on this occasion the Reader would look coldly upon my arguments, since I might be suspected of having been principally influenced by the selfish and foolish hope of reasoning him into an approbation of these particular Poems: and I was still more unwilling to undertake the task, because adequately to display my opinions and fully to enforce my arguments would require a space wholly disproportionate to the nature of a preface. For to treat the subject with the clearness and coherence, of which I believe it susceptible, it would be necessary to give a full account of the present state of the public taste in this country, and to determine how far this taste is healthy or depraved; which again could not be determined, without pointing out, in what manner language and the human mind act and react on each other, and without retracing the revolutions not of literature alone but likewise of society itself. I have therefore altogether declined to enter regularly upon this defence; yet I am sensible, that there would be some impropriety in abruptly obtruding upon the Public, without a few words of introduction, Poems so materially different from those, upon which general approbation is at present bestowed....