Lyra Heroica A Book of Verse for Boys 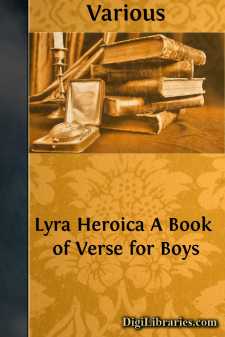 This book of verse for boys is, I believe, the first of its kind in English. Plainly, it were labour lost to go gleaning where so many experts have gone harvesting; and for what is rarest and best in English Poetry the world must turn, as heretofore, to the several ‘Golden Treasuries’ of Professor Palgrave and Mr. Coventry Patmore, and to the excellent ‘Poets' Walk’ of Mr. Mowbray Morris. My purpose has been to choose and sheave a certain number of those achievements in verse which, as expressing the simpler sentiments and the more elemental emotions, might fitly be addressed to such boys—and men, for that matter—as are privileged to use our noble English tongue.

To set forth, as only art can, the beauty and the joy of living, the beauty and the blessedness of death, the glory of battle and adventure, the nobility of devotion—to a cause, an ideal, a passion even—the dignity of resistance, the sacred quality of patriotism, that is my ambition here. Now, to read poetry at all is to have an ideal anthology of one's own, and in that possession to be incapable of content with the anthologies of all the world besides. That is, the personal equation is ever to be reckoned withal, and I have had my preferences, as those that went before me had theirs. I have omitted much, as Aytoun's ‘Lays,’ whose absence many will resent; I have included much, as that brilliant piece of doggerel of Frederick Marryat's, whose presence some will regard with distress. This without reference to enforcements due to the very nature of my work.

I have adopted the birth-day order: for that is the simplest. And I have begun with—not Chaucer, nor Spenser, nor the ballads, but—Shakespeare and Agincourt; for it seemed to me that a book of heroism could have no better starting-point than that heroic pair of names. As for the ballads, I have placed them, after much considering, in the gap between old and new, between classic and romantic, in English verse. The witness of Sidney and Drayton's example notwithstanding, it is not until 1765, when Percy publishes the ‘Reliques,’ that the ballad spirit begins to be the master influence that Wordsworth confessed it was; while as for the history of the matter, there are who hold that ‘Sir Patrick Spens,’ for example, is the work of Lady Wardlaw, which to others, myself among them, is a thing preposterous and distraught.

It remains to add that, addressing myself to boys, I have not scrupled to edit my authors where editing seemed desirable, and that I have broken up some of the longer pieces for convenience in reading. Also, the help I have received while this book of ‘Noble Numbers’ was in course of growth—help in the way of counsel, suggestion, remonstrance, permission to use—has been such that it taxes gratitude and makes complete acknowledgment impossible.