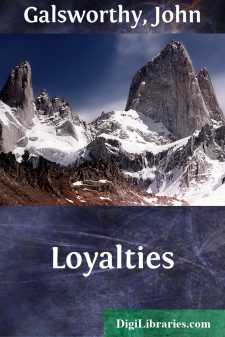 ACT I SCENE I The dressing-room of CHARLES WINSOR, owner of Meldon Court, nearNewmarket; about eleven-thirty at night. The room has pale greywalls, unadorned; the curtains are drawn over a window Back LeftCentre. A bed lies along the wall, Left. An open door, Right Back,leads into LADY ADELA's bedroom; a door, Right Forward, into a longcorridor, on to which abut rooms in a row, the whole length of thehouse's left wing. WINSOR's dressing-table, with a light over it,is Stage Right of the curtained window. Pyjamas are laid out on thebed, which is turned back. Slippers are handy, and all the usualgear of a well-appointed bed-dressing-room. CHARLES WINSOR, a tall,fair, good-looking man about thirty-eight, is taking off a smokingjacket.

She appears in the doorway in under-garment and a wrapper. She,too, is fair, about thirty-five, rather delicious, and suggestiveof porcelain.

WINSOR. That young man has too much luck—the young bounder won two races to-day; and he's as rich as Croesus.

LADY A. Oh! Charlie, he did look so exactly as if he'd sold me a carpet when I was paying him.

WINSOR. [Changing into slippers] His father did sell carpets, wholesale, in the City.

LADY A. Really? And you say I haven't intuition! [With a finger on her lips] Morison's in there.

WINSOR. [Motioning towards the door, which she shuts] Ronny Dancy took a tenner off him, anyway, before dinner.

WINSOR. Standing jump on to a bookcase four feet high. De Levis had to pay up, and sneered at him for making money by parlour tricks. That young Jew gets himself disliked.

LADY A. Aren't you rather prejudiced?

WINSOR. Not a bit. I like Jews. That's not against him—rather the contrary these days. But he pushes himself. The General tells me he's deathly keen to get into the Jockey Club. [Taking off his tie] It's amusing to see him trying to get round old St Erth.

LADY A. If Lord St Erth and General Canynge backed him he'd get in if he did sell carpets!

WINSOR. He's got some pretty good horses. [Taking off his waistcoat] Ronny Dancy's on his bones again, I'm afraid. He had a bad day. When a chap takes to doing parlour stunts for a bet—it's a sure sign. What made him chuck the Army?

LADY A. He says it's too dull, now there's no fighting.

LADY A. Isn't it just like him to get married now? He really is the most reckless person.

WINSOR. Yes. He's a queer chap. I've always liked him, but I've never quite made him out. What do you think of his wife?

LADY A. Nice child; awfully gone on him.

LADY A. Quite indecently—both of them. [Nodding towards the wall, Left] They're next door.

WINSOR. Who's beyond them?

LADY A. De Levis; and Margaret Orme at the end. Charlie, do you realise that the bathroom out there has to wash those four...?