Love to the Uttermost Expositions of John XIII.-XXI.

by F. B. (Frederick Brotherton) Meyer 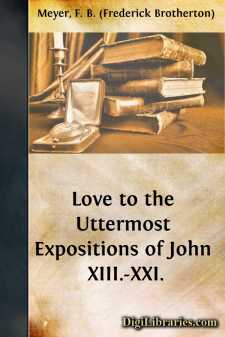 The Laver in the Life of Jesus

"He poureth water into a basin, and began to wash the disciples' feet, and to wipe them with a towel wherewith He was girded."—JOHN xiii. 5.

In the court of the Temple there were two objects that arrested the eye of the entering worshipper—the Brazen Altar, and the Laver. The latter was kept always full of pure, fresh water, for the constant washings enjoined by the Levitical code. Before the priests were consecrated for their holy work, and attired in the robes of the sacred office, they washed there (Ex. xxix. 4). Before they entered the Holy Place in their ordinary ministry, and before Aaron, on the great Day of Atonement, proceeded to the Most Holy Place, with blood, not his own, it was needful to conform to the prescribed ablutions. "He shall bathe his flesh in water" (Lev. xvi. 4).

First, then, the Altar, and then the Laver; the order is irreversible, and the teaching of the types is as exact as mathematics. Hence, when the writer of the Epistle to the Hebrews invites us to draw near, and make our abode in the Most Holy Place, he carefully obeys the Divine order, and bids us "draw near, with a true heart, in full assurance of faith, having our hearts sprinkled from an evil conscience, and our bodies washed with pure water."

In this scene (John xiii. 1-14), on the eve of our Lord's betrayal, we find the spiritual counterpart of the Laver, just as the Cross stands for the Brazen Altar.

I. THE CIRCUMSTANCE THAT LED TO THIS ACT OF LOVE.—In order fully to understand this touching incident, it is necessary to remember the circumstances out of which it sprang. On the way from Bethany to the upper room in which the Supper had been prepared, and on entering therein, our Lord must have been deeply absorbed in the momentous events in which He was to be the central figure; but He was not unmindful of a contention which had engaged His disciples, for they had been disputing one with another as to which of them should be the greatest. The proud spirit of the flesh, which so often cursed the little group, broke out in this awful hour with renewed energy, as though the prince of this world would inflict a parting blow on his great Antagonist, through those whom He loved best. It was as if he said, "See the results of Thy tears and teachings, of Thy prayers and pleadings; the love which Thou hast so often inculcated is but a passing sentiment, that has never rooted itself in the soil of these wayward hearts. It is a plant too rare and exotic for the climate of earth. Take it back with Thee to Thine own home if Thou wilt, but seek not to achieve the impossible." It was heartrending that this exhibition of pride should take place just at this juncture. These were the men who had been with Him in His temptations, who had had the benefit of His most careful instructions, who had been exposed to the full influence of His personal character; and yet, notwithstanding all, the rock-bed of pride, that cast the angels down from heaven, that led to the fall of man, obtruded itself....