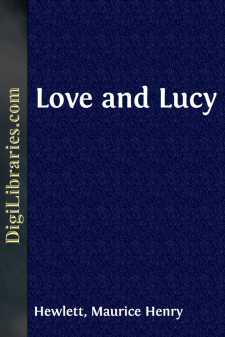 This is a romantic tale. So romantic is it that I shall be forced to pry into the coy recesses of the mind in order to exhibit a connected, reasonable affair, not only of a man and his wife prosperously seated in the mean of things, nel mezzo del cammin in space as well as time—for the Macartneys belonged to the middle class, and were well on to the middle of life themselves—, but of stript, quivering and winged souls tiptoe within them, tiptoe for flight into diviner spaces than any seemly bodies can afford them. As you peruse you may find it difficult to believe that Macartney himself—James Adolphus, that remarkable solicitor—could have possessed a quivering, winged soul fit to be stript, and have hidden it so deep. But he did though, and the inference is that everybody does. As for the lady, that is not so hard of belief. It very seldom is—with women. They sit so much at windows, that pretty soon their eyes become windows themselves—out of which the soul looks darkling, but preening; out of which it sometimes launches itself into the deep, wooed thereto or not by aubade or serena. But a man, with his vanity haunting him, pulls the blinds down or shuts the shutters, to have it decently to himself, and his looking-glass; and you are not to know what storm is enacting deeply within. Finally, I wish once for all to protest against the fallacy that piracy, brigandage, pearl-fishery and marooning are confined to the wilder parts of the habitable globe. Never was a greater, if more amiable, delusion fostered (to serve his simplicity) by Lord Byron and others. Because a man wears trousers, shall there be no more cakes and ale? Because a woman subscribes to the London Institution, desires the suffrage, or presides at a Committee, does the bocca baciata perde ventura? Believe me, no. There are at least two persons in each of us, one at least of which can course the starry spaces and inhabit where the other could hardly breathe for ten minutes. Such is my own experience, and such was the experience of the Macartney pair—and now I have done with exordial matter.

The Macartneys had a dinner-party on the twelfth of January. There were to be twelve people at it, in spite of the promised assistance of Lancelot at dessert, which Lucy comforted herself by deciding would only make twelve and a half, not thirteen. She told that to her husband, who fixed more firmly his eyeglass, and grunted, "I'm not superstitious, myself." He may not have been, but certainly, Lucy told herself, he wasn't very good at little jokes. Lancelot, on the other hand, was very good at them. "Twelve and a half!" he said, lifting one eyebrow, just like his father. "Why, I'm twelve and a half myself!" Then he propounded his little joke. "I say, Mamma, on the twelve and halfth of January—because the evening is exactly half the day—twelve and a half people have a dinner-party, and one of them is twelve and a half. Isn't that neat?"

Lucy encouraged her beloved. "It's very neat indeed," she said, and her grey eyes glowed, or seemed to glow....