Love affairs of the Courts of Europe 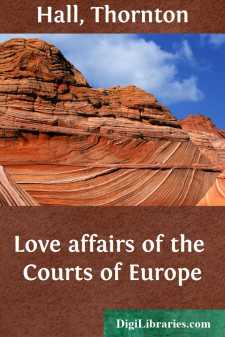 CHAPTER I A COMEDY QUEEN

"It was to a noise like thunder, and close clasped in a soldier's embrace, that Catherine I. made her first appearance in Russian history."

History, indeed, contains few chapters more strange, more seemingly impossible, than this which tells the story of the maid-of-all-work—the red-armed, illiterate peasant-girl who, without any dower of beauty or charm, won the idolatry of an Emperor and succeeded him on the greatest throne of Europe. So obscure was Catherine's origin that no records reveal either her true name or the year or place of her birth. All that we know is that she was cradled in some Livonian village, either in Sweden or Poland, about the year 1685, the reputed daughter of a serf-mother and a peasant-father; and that her numerous brothers and sisters were known in later years by the name Skovoroshtchenko or Skovronski. The very Christian name by which she is known to history was not hers until it was given to her by her Imperial lover.

It is not until the year 1702, when the future Empress of the Russias was a girl of seventeen, that she makes her first dramatic appearance on the stage on which she was to play so remarkable a part. Then we find her acting as maid-servant to the Lutheran pastor of Marienburg, scrubbing his floors, nursing his children, and waiting on his resident pupils, in the midst of all the perils of warfare. The Russian hosts had for weeks been laying siege to Marienburg; and the Commandant, unable to defend the town any longer against such overwhelming odds, had announced his intention to blow up the fortress, and had warned the inhabitants to leave the town.

Between the alternatives of death within the walls and the enemy without, Pastor Glück chose the latter; and sallying forth with his family and maid-servant, threw himself on the mercy of the Russians who promptly packed him off to Moscow a prisoner. For Martha (as she seems to have been known in those days) a different fate was reserved. Her red lips, saucy eyes, and opulent figure were too seductive a spoil to part with, General Shérémétief decided, and she was left behind, a by no means reluctant hostage.

Peter's soldiers, now that victory was assured, were holding high revel of feasting and song and dancing. They received the new prisoner literally with open arms, and almost before she had wiped the tears from her eyes, at parting from her nurslings, she was capering gaily to the music of hautboy and fiddle, with the arm of a stalwart soldier round her waist.

"Suddenly," says Waliszewski, "a fearful explosion overthrew the dancers, cut the music short, and left the servant-maid, fainting with terror, in the arms of a dragoon."

Thus did Martha, the "Siren of the Kitchen," dance her way into Russian history, little dreaming, we may be sure, to what dizzy heights her nimble feet were to carry her. For a time she found her pleasure in the attentions of a non-commissioned officer, sharing the life of camp and barracks and making friends by the good-nature which bubbled in her, and which was always her chief charm....