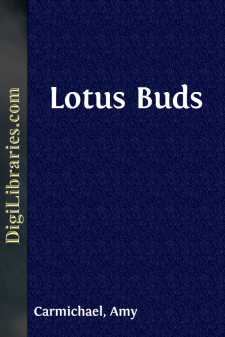 WHEN first "Things as they are" trod the untrodden way, it walked as a small child walks when for the first time it ventures forth upon young, uncertain feet. It has to walk; it does not know why: it only knows there is no choice about it. But there is an eager looking for an outstretched hand, and an instant gratefulness always, for even a finger. A whole hand given without reserve is something never forgotten.

It was only a child after all, and it had not anticipated having to find its way alone among strangers. It had thought of nothing further than a very short walk among familiar faces. If it had understood beforehand how far it would have to walk, I doubt if it would have had the courage to start; for it was not naturally brave. But once on its way it could not turn back; and thanks to those kindly outstretched hands, it grew a little less afraid, and it went on.

Then another small wayfarer followed. It also was very easily discouraged; an unfriendly push would have knocked it over at once. But nobody seemed to want to push so unpretentious a thing, so it gained courage and went on.

And now a more grown-up looking traveller (though indeed its looks belie it) has started on its way; more diffident, if the truth must be told, than even its predecessors. For it thought within itself—Perhaps there will be no welcoming hands held out this time; hands may grow tired of such kind offices. But it has not been so. And now the sense of gratefulness cannot longer be repressed.

All of which means that I want to thank sincerely those kings of the Book World—Reviewers—and those dwellers in that world who are my Readers, for their insight and the sympathy to which I owe so much.

Once I read of a soldier who wrote a letter home from the midst of a battle, on a crumpled piece of paper laid upon a cannon ball. His home people he knew would overlook the appearance of the paper and the lack of various things expected in a letter written in a quiet room upon a study table. And he knew he could trust them not to bring too fine a criticism to bear upon the unstudied words hot from the battle's heart.

I have thought sometimes that these books were not unlike that soldier's letter; and those who read them seem to me very like his home people, for they have been so generous in the kindness of their welcome.

Amy Wilson-Carmichael. Dohnavur,Tinnevelly DistrictS. India.Feb. 19, 1912. THE WRITER TO THE READER THE photographs (except two) were taken by Mr. Penn, of Ootacamund, whose work is known to all who care to possess good photographs of the South Indian hills. The babies were a new experience to him, and something of a trial, I fear, after the mountains, which can be trusted to sit still.

The book has been written for lovers of children. Those who find such young life tiresome will find the story dull, and the kindest thing it can ask of them is not to read it at all.

CONTENTS CHAPTER PAGE I.  LOTUS BUDS II.  OPPOSITES III.  THE SCAMP IV.  THE PHOTOGRAPHS V.  TARA AND EVU VI.  PRINCIPALITIES, POWERS, RULERS VII.  HOW THE CHILDREN COME VIII.  OTHERS IX.  OLD DÉVAI X.  FAILURES? XI.  GOD HEARD: GOD ANSWERED XII.  TO WHAT PURPOSE? XIII.  A STORY OF COMFORT XIV.  PICKLES AND PUCK XV.  THE HOWLER XVI.  THE NEYOOR NURSERY XVII.  IN THE COMPOUND AND NEAR IT XVIII.  FROM THE TEMPLE OF THE ROCK XIX.  YOSÉPU XX.  THE MENAGERIE XXI.  MORE ANIMALS XXII.  THE PARROT HOUSE XXIII.  THE BEAR GARDEN XXIV.  THE ACCALS XXV.  THE LITTLE ACCALS XXVI.  THE GLORY OF THE USUAL XXVII.  THE SECRET TRAFFIC XXVIII.  BLUE BOOK EVIDENCE XXIX.  "VERY COMMON IN THOSE PARTS" XXX.  ON THE SIDE OF THE OPPRESSORS THERE WAS POWER XXXI.  AND THERE WAS NONE TO SAVE XXXII.  THE POWER BEHIND THE WORK XXXIII.  IF THIS WERE ALL XXXIV.  "TO CONTINUE THE SUCCESSION" XXXV.  WHAT IF SHE MISSES HER CHANCE...?
Show more
Show less