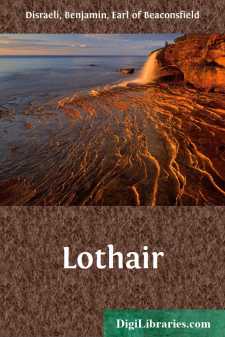 One's life changes in a moment. Half a month ago, Lothair, without an acquaintance, was meditating his return to Oxford. Now he seemed to know everybody who was anybody. His table was overflowing with invitations to all the fine houses in town. First came the routs and the balls; then, when he had been presented to the husbands, came the dinners. His kind friends the Duchess and Lady St. Jerome were the fairies who had worked this sudden scene of enchantment. A single word from them, and London was at Lothair's feet.

He liked it amazingly. He quite forgot the conclusion at which he had arrived respecting society a year ago, drawn from his vast experience of the single party which he had then attended. Feelings are different when you know a great many persons, and every person is trying to please you; above all, when there are individuals whom you want to meet, and whom, if you do not meet, you become restless.

Town was beginning to blaze. Broughams whirled and bright barouches glanced, troops of social cavalry cantered and caracolled in morning rides, and the bells of prancing ponies, lashed by delicate hands, gingled in the laughing air. There were stoppages in Bond Street, which seems to cap the climax of civilisation, after crowded clubs and swarming parks.

But the great event of the season was the presentation of Lady Corisande. Truly our bright maiden of Brenthani woke and found herself famous. There are families whom everybody praises, and families who are treated in a different way. Either will do; all the sons and daughters of the first succeed, all the sons and daughters of the last are encouraged in perverseness by the prophetic determination of society. Half a dozen married sisters, who were the delight and ornament of their circles, in the case of Lady Corisande were good precursors of popularity; but the world would not be content with that: they credited her with all their charms and winning qualities, but also with something grander and beyond comparison; and from the moment her fair cheek was sealed by the gracious approbation of Majesty, all the critics of the Court at once recognised her as the cynosure of the Empyrean.

Monsignore Catesby, who looked after Lothair, and was always breakfasting with him without the necessity of an invitation (a fascinating man, and who talked upon all subjects except High Mass), knew everything that took place at Court without being present there himself. He led the conversation to the majestic theme, and while he seemed to be busied in breaking an egg with delicate precision, and hardly listening to the frank expression of opinions which he carelessly encouraged, obtained a not insufficient share of Lothair's views and impressions of human beings and affairs in general during the last few days, which had witnessed a Levée and a Drawing-room.

'Ah! then you were so fortunate as to know the beauty before her début,' said the Monsignore.

'Intimately; her brother is my friend. I was at Brentham last summer....