Lost on the Moon Or, in Quest of the Field of Diamonds 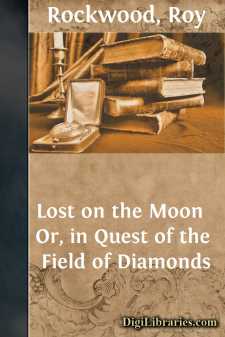 CHAPTER I A WONDERFUL STORY

"Well, what do you think of it, Mark?" asked Jack Darrow, as he laid aside a portion of a newspaper, covered with strange printed characters. "Great; isn't it?"

"You don't mean to tell me that you believe that preposterous story, do you, Jack?" And Mark Sampson looked across the table at his companion in some astonishment.

"Oh, I don't know; it may be true," went on Jack, again picking up the paper and gazing thoughtfully at it. "I wish it was."

"But think of it!" exclaimed Mark. "Why, if such a thing exists, and if we, or some one else, should attempt to bring all those precious stones to this earth, it would revolutionize the diamond industry of the world. It can't be true!"

"Well, here It is, in plain print. You can read it for yourself, as you know the Martian language as well as I do. It states that a large field of 'Reonaris' was discovered on the moon near Mare Tranquilitatis (or Tranquil Ocean, I suppose that could be translated), and that the men of Mars brought back some of the Reonaris with them. Here, read it, if you don't believe me."

"Oh, I believe you, all right—that is, I think you have translated that article as well as you can. But suppose you have made some error? We didn't have much time to study the language of Mars while we were there, and we might make some mistake in the words. That article might be an account of a dog-fight on the red planet, instead of an account of a trip to the moon and the discovery of a field of Reonaris; eh, Jack?"

"Of course, I'm likely to have made an error, for it isn't easy to translate this stuff." And Jack gazed intently at the strangely printed page, which was covered with characters not unlike Greek. "I may be wrong," went on the lad, "but you must remember that I translated some other articles in this paper, and Professor Henderson also translated them substantially as I did, and Professor Roumann agreed with him. There is Reonaris on the moon, and I wish we could go there and get some."

"But maybe after you got the Reonaris it would turn out to be only common crystals," objected Mark.

"No!" exclaimed Jack. "Reonaris is what the Martians call it in their language, and that means diamonds. I'm sure of it!"

"Well, I don't agree with you," declared the other lad.

"I'm not; but what's the use of believing anything so wild and weird as that? It's a crazy yarn!"

"It's nothing of the sort! There are diamonds on the moon; and I can prove it!"

"Well, don't get excited," suggested Mark calmly. "I don't believe it; that's all. You're mistaken about what Reonaris is; that's what you are."

"I am not!" Jack had arisen from his chair, and seemed much elated. In his hand he held clinched the paper which had caused the lively discussion. It was as near to a disagreement as Jack Darrow and Mark Sampson had come in some time.

"I'm going to get Professor Henderson and Professor Roumann to translate this article for you, and then you can ask them what Reonaris is....