Lost in the Forest Wandering Will's Adventures in South America 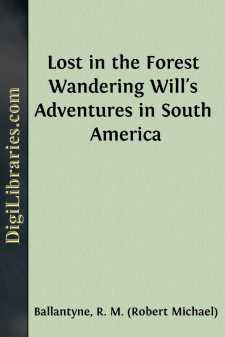 At Sea—An Alarming Cry and a Rescue.

“At sea once more!” said Will Osten in a meditative mood.

Our hero made this remark one night to himself, which was overheard and replied to by his friend, Captain Dall, in a manner that surprised him.

“It’s my opinion, doctor,” said the captain in a low voice, “that this is the last time you or I will ever be at sea, or anywhere else, if our skipper don’t look better after his men, for a more rascally crew I never set eyes on, and, from a word or two I have heard dropped now and then, I feel sure some mischief is in the wind. Come aft with me to a place where we ain’t so likely to be overheard by eavesdroppers, and I’ll tell you all about it.”

Will Osten was so much astonished at his friend’s remark, that he followed him to the after part of the ship without uttering a word, and there sat down on the taffrail to listen to what he had to communicate.

There was no moon in the clear sky, and the hosts of stars that studded the dark vault overhead did not shed any appreciable light on the waters of the Pacific, on which the Rover floated almost motionless. That beautiful and mysterious phosphorescence which sometimes illumines the sea was gleaming in vivid flashes in the vessel’s wake, and a glowing trail of it appeared to follow the rudder like a serpent of lambent fire.

It was one of those calm, peaceful nights in which God seems to draw nearer than usual to the souls of His creatures. The only sounds that broke the profound stillness were the pattering of reef-points on the sails as the vessel rose and sank gently on the oily swell; the measured tread of the officer of the watch, and the humming of the man at the wheel, as he stood idly at his post, for the vessel had scarcely steering-way.

“Doctor,” said Captain Dall in a low whisper, taking Will Osten by the button-hole and bending forward until his eyes were close to those of his young friend, “I little thought when I set sail from England that, in a few weeks after, my good ship the Foam would come a wreck an’ sink to the bottom of the Pacific before my eyes. Still less did I think that I should be cast on a coral island, have to fight like a naked savage, and be saved at last by missionaries from being roasted and eaten. Yet all this has happened within a few months.”

At any other time Will Osten would have smiled at the solemn manner in which this was said, but there was something in the hour, and also in the tone of his friend’s voice, which tended to repress levity and raise a feeling of anxiety in his mind.

“Well, captain,” he said, “what has this to do with the present evil that you seem to apprehend?”

“To do with it, lad? nothing—’xcept that it reminds me that we little know what is in store for us. Here are we becalmed—three day’s sail from the coral island, where the niggers were so near converting us into cooked victuals, and I wouldn’t at this minute give twopence in security for the life of any one on board the Rover.”

“Why, what mean you?” asked Will, with increasing perplexity....