Loss and Gain The Story of a Convert 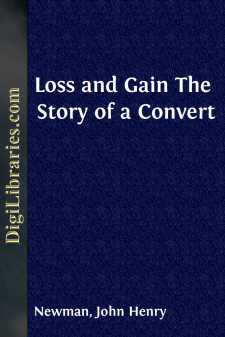 My dear Dr. Russell,—Now that at length I take the step of printing my name in the Title-Page of this Volume, I trust I shall not be encroaching on the kindness you have so long shown to me, if I venture to follow it up by placing yours in the page which comes next, thus associating myself with you, and recommending myself to my readers by the association.

Not that I am dreaming of bringing down upon you, in whole or part, the criticisms, just or unjust, which lie against a literary attempt which has in some quarters been thought out of keeping with my antecedents and my position; but the warm and sympathetic interest which you took in Oxford matters thirty years ago, and the benefits which I derived personally from that interest, are reasons why I am desirous of prefixing your name to a Tale, which, whatever its faults, at least is a more intelligible and exact representation of the thoughts, sentiments, and aspirations, then and there prevailing, than was to be found in the anti-Catholic pamphlets, charges, sermons, reviews, and story-books of the day.

These reasons, too, must be my apology, should I seem to be asking your acceptance of a Volume, which, over and above its intrinsic defects, is, in its very subject and style, hardly commensurate with the theological reputation and the ecclesiastical station of the person to whom it is presented.

The following tale is not intended as a work of controversy in behalf of the Catholic Religion; but as a description of what is understood by few, viz. the course of thought and state of mind,—or rather one such course and state,—which issues in conviction of its Divine origin.

Nor is it founded on fact, to use the common phrase. It is not the history of any individual mind among the recent converts to the Catholic Church. The principal characters are imaginary; and the writer wishes to disclaim personal allusion in any. It is with this view that he has feigned ecclesiastical bodies and places, to avoid the chance, which might otherwise occur, of unintentionally suggesting to the reader real individuals, who were far from his thoughts.

At the same time, free use has been made of sayings and doings which were characteristic of the time and place in which the scene is laid. And, moreover, when, as in a tale, a general truth or fact is exhibited in individual specimens of it, it is impossible that the ideal representation should not more or less coincide, in spite of the author's endeavour, or even without his recognition, with its existing instances or champions.

It must also be added, to prevent a farther misconception, that no proper representative is intended in this tale, of the religious opinions which had lately so much influence in the University of Oxford.

ADVERTISEMENT TO THE SIXTH EDITION.

A tale, directed against the Oxford converts to the Catholic Faith, was sent from England to the author of this Volume in the summer of 1847, when he was resident at Santa Croce in Rome. Its contents were as wantonly and preposterously fanciful, as they were injurious to those whose motives and actions it professed to represent; but a formal criticism or grave notice of it seemed to him out of place.

The suitable answer lay rather in the publication of a second tale; drawn up with a stricter regard to truth and probability, and with at least some personal knowledge of Oxford, and some perception of the various aspects of the religious phenomenon, which the work in question handled so rudely and so unskilfully....