Lorimer of the Northwest 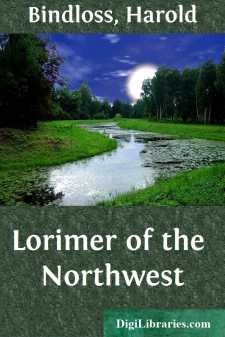 It is a still, hot day in autumn, and there is a droning of mosquitoes where I sit by an open window, glancing alternately out across the Assiniboian prairie and somewhat blankly at the bundle of paper before me, ready to begin this story. Its telling will not be an easy matter, but one finds idle hours pass heavily after a life such as mine has been, and since the bronco blundering into a badger-hole fell and broke my leg the surgeon who rode forty miles to set it said that if I was to work at harvest I must not move before—and the harvest is already near. So I nibble the pen and look around the long match-boarded hall, waiting for the inspiration which is strangely slow in coming, while my wife, who was Grace Carrington, smiles over her sewing and suggests that it is high time to begin.

There are many guns on the wall glistening like sardines with oil rubbed well in, and among them the old Winchester which once saved us from starvation in British Columbia. There are also long rows of painted butterflies and moths whose colors pleased Grace’s fancy when I caught them in the sloos. Sometimes I wonder whether she really likes that kind of decoration, or merely pinned them to the wall because I caught them for her. Then, and this is my own fancy, the bit of the horse which once saved her life hangs in a place of its own under the heads of the antelopes and the forward half of a crane with which a Winnipeg taxidermist has travestied nature. There are also a few oil paintings and, of course, some furniture, but I am not learned in such matters, and know only that it cost me many dollars when I brought it from Toronto on one of Grace’s birthdays, and I have never regretted the investment.

No, there is nothing here that merits much comment, though Fairmead is one of the finest homesteads between the Saskatchewan and the Souris. Then as I gaze with half-closed eyes through the open window the memories awaken and crowd, as it were, upon one another. Far out on the rim of the prairie lies a silvery haze, through which the vault of azure melts into the dusty whiteness of the grasses. Then, level on level, with each slowly swelling rise growing sharper under that crystalline atmosphere the prairie rolls in, broken here by a willow copse and there by a straggling birch bluff, while a belt of cool neutral shadow marks the course of a deep-sunk ravine. At first sight it is all one glaring sweep of white and gray, but on looking closer with understanding eyes one sees the yellow and sage-green of tall reeds in a sloo, the glowing lights of sun-bleached buffalo bones, and a mingling of many colors where there is wild peppermint or flowers among the grass. Then, broad across the foreground, growing tall and green in a few moister places, and in others changing to ochre and coppery red, there ripples, acre after acre, a great sea of grain whose extent is beyond the comprehension of the insular Briton.

That, at least, with its feathery oat tassels and stately heads of wheat, is a picture well worth looking upon, for there are few places in the world where one may see furrows of equal length....