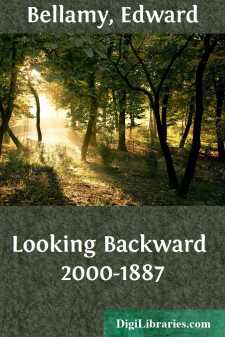 A good many of my radical friends express a certain kindly condescension when they speak of Edward Bellamy's "Looking Backward."

"Of course you know," they say, "that it really isn't first-rate economics."

And yet in further conversation I have known a very large number of these same somewhat scornful Socialists to admit, "You know, the first thing that got me started to thinking about Socialism was Bellamy's 'Looking Backward.'"

From the beginning it has been a highly provocative book. It is now. Many of the questions both of mood and technique are even more pertinent in the year 1931 than they were in 1887. A critic of the Boston Transcript said, when the novel first appeared, that the new State imagined by Bellamy was all very well, but that the author lost much of his effectiveness by putting his Utopia a scant fifty years ahead, and that he might much better have made it seventy-five centuries.

It is true that the fifty years assigned for changing the world utterly are almost gone by now. Not everything which was predicted in "Looking Backward" has come to pass. But the laugh is not against Bellamy, but against his critic. Some of the things which must have seemed most improbable of all to the Transcript man of 1887 are now actually in being.

In one respect Edward Bellamy set down a picture of modern American life which is almost a hundred per cent realized. It startled me to read the passage in which Edith shows the musical schedule to Julian West, and tells him to choose which selection he wishes to have brought through the air into the music room. It is true that Bellamy imagined this broadcasting to be done over telephone wires, as is indeed the case to-day in some phases of national hook-ups. But consider this quotation:

"He [Dr. Leete] showed how, by turning a screw, the volume of the music could be made to fill the room, or die away to an echo so faint and far that one could scarcely be sure whether he heard or imagined it."

That might almost have been lifted bodily from an article in some newspaper radio column.

But Bellamy did see with clear vision things and factors much more important than the possibility of hearing a sermon without going to church. Much which is now established in Soviet Russia bears at least a likeness to the industrial army visioned in this prophetic book. However, Communism can scarcely claim Bellamy as its own, for he emphasizes repeatedly the non-violent features of the revolution which he imagined. Indeed, at one point he argues that the left-wingers of his own day impeded change by the very excesses of their technical philosophy.

There is in his book no acceptance of a transitional stage of class dictatorship. He sees the change coming through a general recognition of the failings of the capitalist system. Indeed, he sees a point in economic development where capitalism may not even be good enough for the capitalist.

To the strict Marxian Socialist this is profound and ridiculous heresy. To me it does not seem fantastic....