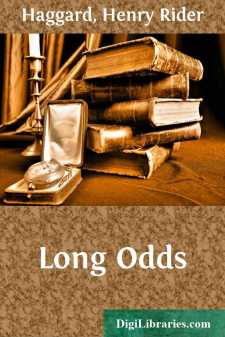 The story which is narrated in the following pages came to me from the lips of my old friend Allan Quatermain, or Hunter Quatermain, as we used to call him in South Africa. He told it to me one evening when I was stopping with him at the place he bought in Yorkshire. Shortly after that, the death of his only son so unsettled him that he immediately left England, accompanied by two companions, his old fellow-voyagers, Sir Henry Curtis and Captain Good, and has now utterly vanished into the dark heart of Africa. He is persuaded that a white people, of which he has heard rumours all his life, exists somewhere on the highlands in the vast, still unexplored interior, and his great ambition is to find them before he dies. This is the wild quest upon which he and his companions have departed, and from which I shrewdly suspect they never will return. One letter only have I received from the old gentleman, dated from a mission station high up the Tana, a river on the east coast, about three hundred miles north of Zanzibar. In it he says they have gone through many hardships and adventures, but are alive and well, and have found traces which go far towards making him hope that the results of their wild quest may be a "magnificent and unexampled discovery." I greatly fear, however, that all he has discovered is death; for this letter came a long while ago, and nobody has heard a single word of the party since. They have totally vanished.

It was on the last evening of my stay at his house that he told the ensuing story to me and Captain Good, who was dining with him. He had eaten his dinner and drunk two or three glasses of old port, just to help Good and myself to the end of the second bottle. It was an unusual thing for him to do, for he was a most abstemious man, having conceived, as he used to say, a great horror of drink from observing its effects upon the class of men—hunters, transport riders, and others—amongst whom he had passed so many years of his life. Consequently the good wine took more effect on him that it would have done on most men, sending a little flush into his wrinkled cheeks, and making him talk more freely than usual.

Dear old man! I can see him now, as he went limping up and down the vestibule, with his grey hair sticking up in scrubbing-brush fashion, his shrivelled yellow face, and his large dark eyes, that were as keen as any hawk's, and yet soft as a buck's. The whole room was hung with trophies of his numerous hunting expeditions, and he had some story about every one of them, if only he could be got to tell them. Generally he would not, for he was not very fond of narrating his own adventures, but to-night the port wine made him more communicative.

"Ah, you brute!" he said, stopping beneath an unusually large skull of a lion, which was fixed just over the mantelpiece, beneath a long row of guns, its jaws distended to their utmost width. "Ah, you brute! you have given me a lot of trouble for the last dozen years, and will, I suppose, to my dying day."

"Tell us the yarn, Quatermain," said Good. "You have often promised to tell me, and you never have."

"You had better not ask me to," he answered, "for it is a longish one."

"All right," I said, "the evening is young, and there is some more port."

Thus adjured, he filled his pipe from a jar of coarse-cut Boer tobacco that was always standing on the mantelpiece, and still walking up and down the room, began—

"It was, I think, in the March of '69 that I was up in Sikukuni's country. It was just after old Sequati's time, and Sikukuni had got into power—I forget how. Anyway, I was there. I had heard that the Bapedi people had brought down an enormous quantity of ivory from the interior, and so I started with a waggon-load of goods, and came straight away from Middelburg to try and trade some of it. It was a risky thing to go into the country so early, on account of the fever; but I knew that there were one or two others after that lot of ivory, so I determined to have a try for it, and take my chance of fever. I had become so tough from continual knocking about that I did not set it down at much.

"Well, I got on all right for a while. It is a wonderfully beautiful piece of bush veldt, with great ranges of mountains running through it, and round granite koppies starting up here and there, looking out like sentinels over the rolling waste of bush. But it is very hot—hot as a stew-pan—and when I was there that March, which, of course, is autumn in this part of Africa, the whole place reeked of fever....