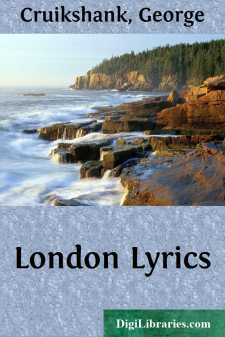 The father of Frederick Locker Lampson (or Frederick Locker, according to the name by which he is generally known) was Edward Hawke Locker, at one time Commissioner of Greenwich Hospital.  He is described in the “Dictionary of National Biography” as “a man of varied talents and accomplishments, Fellow of the Royal Society, an excellent artist in water-colour, a charming conversationalist, an esteemed friend of Southey and Scott.”  Frederick, the author of “London Lyrics,” “was born,” Mr Augustine Birrell, his son-in-law, writes in Scribner’s Magazine (January 1896), “in Greenwich Hospital in 1821.  After divers adventures in various not over well selected schools, and a brief experience of the City and of Somerset House, he became a clerk in the Admiralty, serving under Lord Haddington, Sir James Graham, and Sir Charles Wood.  He was twice married—first, to Lady Charlotte Bruce, a daughter of Lord Elgin (of the Marbles); and secondly, to the only daughter of Sir Curtis Lampson, Bart., of Rowfant in Sussex.”

The present volume is Locker’s earliest literary venture; produced, however, at the comparatively mature age of thirty-six.  “In 1857,” he says in “My Confidences,” “I published a thin volume—certain sparrow-flights of song, called ‘London Lyrics.’”  Subsequently, about 1860, Thackeray, who was then editor of the Cornhill Magazine, invited Locker to contribute; and poems published there and elsewhere were collected and reprinted from time to time, the original title being always retained.  Ten editions, besides some selections privately printed, appeared before the poet’s death.  In almost all something new was added, in all something old was taken away; so that only eight of the twenty-five pieces composing the early “thin volume” survive in the issue of 1893, and some of these are much altered.  It is hoped that readers of Locker’s later and more highly finished work will consider a republication of his “Primitiæ” justified by the interest which attaches to all beginnings.

So many people even now confuse minor poetry with bad poetry that it is almost invidious to call a poet minor.  Yet there is no doubt that minor poetry can be good in its way, just as major poetry can be good in its way.  “If he [Locker] was a minor poet he was at least [why ‘at least’?] a master of the instrument he touched, which cannot,” writes Mr Coulson Kernahan in the Nineteenth Century for October 1895, “be said of all who would be accounted major.”  Locker was not of those, in his own opinion, who would be accounted major.  “My aim,” he says, “was humble.  I used the ordinary metres and rhymes, the simplest language and ideas, I hope, flavoured with an individuality.  I strove . . . not to be flat, and above all, not to be tedious.”  It is not necessary to prove by argument and illustration that Locker is a minor poet, nor that he belongs to that honourable company of writers of what we now call “light verse”—the masters of which are, after all, among the immortals—Horace and Herrick.  His place in that company is not so easy to define.  Probably he stands half way between the serious singers—who succeed by virtue of grace and artistic finish, yet lack the touch of passion, the indefinable something that makes greatness—and the bards whose primary object, like Calverley’s, is to make the reader laugh.  “He elected,” says Mr Coulson Kernahan, “to don the cap and bells when he might have worn the singing robes of the poet”: a description of one who chose to be a jester when he might have been serious, and hardly applicable to Locker, who is never a professed “funny man.”  Mr Kernahan is far more just when he claims for “London Lyrics” a kind of sober gentleness which moves neither to laugh nor to weep: “his sad scenes may touch us to tender melancholy, but never to tears; his gay ones to smile, but seldom to laughter.”  Locker’s Muse is not the Muse of high spirits.  He does not start with the intention of jesting.  He is the gentle and serious spectator of things which are not the most serious in life—with a sense of the humorous which is not repressible, and which enters into all his reflections, but which he never allows wholly to master him....