Lombard Street : a description of the money market 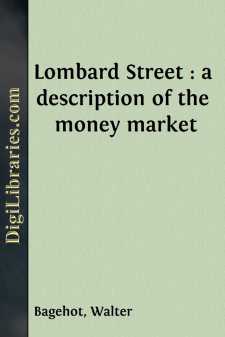 I venture to call this Essay 'Lombard Street,' and not the 'Money Market,' or any such phrase, because I wish to deal, and to show that I mean to deal, with concrete realities. A notion prevails that the Money Market is something so impalpable that it can only be spoken of in very abstract words, and that therefore books on it must always be exceedingly difficult. But I maintain that the Money Market is as concrete and real as anything else; that it can be described in as plain words; that it is the writer's fault if what he says is not clear. In one respect, however, I admit that I am about to take perhaps an unfair advantage. Half, and more than half, of the supposed 'difficulty' of the Money Market has arisen out of the controversies as to 'Peel's Act,' and the abstract discussions on the theory on which that act is based, or supposed to be based. But in the ensuing pages I mean to speak as little as I can of the Act of 1844; and when I do speak of it, I shall deal nearly exclusively with its experienced effects, and scarcely at all, if at all, with its refined basis.

For this I have several reasons,—one, that if you say anything about the Act of 1844, it is little matter what else you say, for few will attend to it. Most critics will seize on the passage as to the Act, either to attack it or defend it, as if it were the main point. There has been so much fierce controversy as to this Act of Parliament—and there is still so much animosity—that a single sentence respecting it is far more interesting to very many than a whole book on any other part of the subject. Two hosts of eager disputants on this subject ask of every new writer the one question—Are you with us or against us? and they care for little else. Of course if the Act of 1844 really were, as is commonly thought, the primum mobile of the English Money Market, the source of all good according to some, and the source of all harm according to others, the extreme irritation excited by an opinion on it would be no reason for not giving a free opinion. A writer on any subject must not neglect its cardinal fact, for fear that others may abuse him. But, in my judgment, the Act of 1844 is only a subordinate matter in the Money Market; what has to be said on it has been said at disproportionate length; the phenomena connected with it have been magnified into greater relative importance than they at all deserve. We must never forget that a quarter of a century has passed since 1844, a period singularly remarkable for its material progress, and almost marvellous in its banking development. Even, therefore, if the facts so much referred to in 1844 had the importance then ascribed to them, and I believe that in some respects they were even then overstated, there would be nothing surprising in finding that in a new world new phenomena had arisen which now are larger and stronger. In my opinion this is the truth: since 1844, Lombard Street is so changed that we cannot judge of it without describing and discussing a most vigorous adult world which then was small and weak....