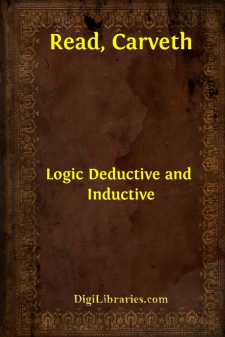 § 1. Logic is the science that explains what conditions must be fulfilled in order that a proposition may be proved, if it admits of proof. Not, indeed, every such proposition; for as to those that declare the equality or inequality of numbers or other magnitudes, to explain the conditions of their proof belongs to Mathematics: they are said to be quantitative. But as to all other propositions, called qualitative, like most of those that we meet with in conversation, in literature, in politics, and even in sciences so far as they are not treated mathematically (say, Botany and Psychology); propositions that merely tell us that something happens (as that salt dissolves in water), or that something has a certain property (as that ice is cold): as to these, it belongs to Logic to show how we may judge whether they are true, or false, or doubtful. When propositions are expressed with the universality and definiteness that belong to scientific statements, they are called laws; and laws, so far as they are not laws of quantity, are tested by the principles of Logic, if they at all admit of proof.

But it is plain that the process of proving cannot go on for ever; something must be taken for granted; and this is usually considered to be the case (1) with particular facts that can only be perceived and observed, and (2) with those highest laws that are called 'axioms' or 'first principles,' of which we can only say that we know of no exceptions to them, that we cannot help believing them, and that they are indispensable to science and to consistent thought. Logic, then, may be briefly defined as the science of proof with respect to qualitative laws and propositions, except those that are axiomatic.

§ 2. Proof may be of different degrees or stages of completeness. Absolute proof would require that a proposition should be shown to agree with all experience and with the systematic explanation of experience, to be a necessary part of an all-embracing and self-consistent philosophy or theory of the universe; but as no one hitherto has been able to frame such a philosophy, we must at present put up with something less than absolute proof. Logic, assuming certain principles to be true of experience, or at least to be conditions of consistent discourse, distinguishes the kinds of propositions that can be shown to agree with these principles, and explains by what means the agreement can best be exhibited. Such principles are those of Contradiction (), the Syllogism (), Causation (), and Probabilities (). To bring a proposition or an argument under them, or to show that it agrees with them, is logical proof.

The extent to which proof is requisite, again, depends upon the present purpose: if our aim be general truth for its own sake, a systematic investigation is necessary; but if our object be merely to remove some occasional doubt that has occurred to ourselves or to others, it may be enough to appeal to any evidence that is admitted or not questioned....