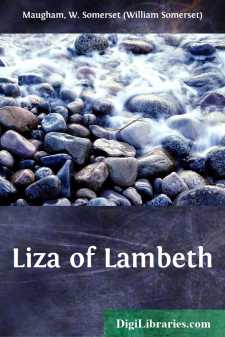 It was the first Saturday afternoon in August; it had been broiling hot all day, with a cloudless sky, and the sun had been beating down on the houses, so that the top rooms were like ovens; but now with the approach of evening it was cooler, and everyone in Vere Street was out of doors.

Vere street, Lambeth, is a short, straight street leading out of the Westminster Bridge Road; it has forty houses on one side and forty houses on the other, and these eighty houses are very much more like one another than ever peas are like peas, or young ladies like young ladies. They are newish, three-storied buildings of dingy grey brick with slate roofs, and they are perfectly flat, without a bow-window or even a projecting cornice or window-sill to break the straightness of the line from one end of the street to the other.

This Saturday afternoon the street was full of life; no traffic came down Vere Street, and the cemented space between the pavements was given up to children. Several games of cricket were being played by wildly excited boys, using coats for wickets, an old tennis-ball or a bundle of rags tied together for a ball, and, generally, an old broomstick for bat. The wicket was so large and the bat so small that the man in was always getting bowled, when heated quarrels would arise, the batter absolutely refusing to go out and the bowler absolutely insisting on going in. The girls were more peaceable; they were chiefly employed in skipping, and only abused one another mildly when the rope was not properly turned or the skipper did not jump sufficiently high. Worst off of all were the very young children, for there had been no rain for weeks, and the street was as dry and clean as a covered court, and, in the lack of mud to wallow in, they sat about the road, disconsolate as poets. The number of babies was prodigious; they sprawled about everywhere, on the pavement, round the doors, and about their mothers' skirts. The grown-ups were gathered round the open doors; there were usually two women squatting on the doorstep, and two or three more seated on either side on chairs; they were invariably nursing babies, and most of them showed clear signs that the present object of the maternal care would be soon ousted by a new arrival. Men were less numerous but such as there were leant against the walls, smoking, or sat on the sills of the ground-floor windows. It was the dead season in Vere Street as much as in Belgravia, and really if it had not been for babies just come or just about to come, and an opportune murder in a neighbouring doss-house, there would have been nothing whatever to talk about. As it was, the little groups talked quietly, discussing the atrocity or the merits of the local midwives, comparing the circumstances of their various confinements.

'You'll be 'avin' your little trouble soon, eh, Polly?' asked one good lady of another.

'Oh, I reckon I've got another two months ter go yet,' answered Polly.

'I 'ope you'll have it easier this time, my dear,' said a very stout old person, a woman of great importance.

'She said she wasn't goin' to 'ave no more, when the last one come.' This remark came from Polly's husband.

'Ah,' said the stout old lady, who was in the business, and boasted vast experience. 'That's wot they all says; but, Lor' bless yer, they don't mean it.'

At that moment an organ-grinder turned the corner and came down the street.

'Good biz; 'ere's an organ!' cried half a dozen people at once.

The organ-man was an Italian, with a shock of black hair and a ferocious moustache. Drawing his organ to a favourable spot, he stopped, released his shoulder from the leather straps by which he dragged it, and cocking his large soft hat on the side of his head, began turning the handle. It was a lively tune, and in less than no time a little crowd had gathered round to listen, chiefly the young men and the maidens, for the married ladies were never in a fit state to dance, and therefore disinclined to trouble themselves to stand round the organ. There was a moment's hesitation at opening the ball; then one girl said to another:

The two girls took hold of one another, one acting gentleman, the other lady; three or four more pairs of girls immediately joined them, and they began a waltz. They held themselves very upright; and with an air of grave dignity which was quite impressive, glided slowly about, making their steps with the utmost precision, bearing themselves with sufficient decorum for a court ball....