Lives of the Presidents Told in Words of One Syllable 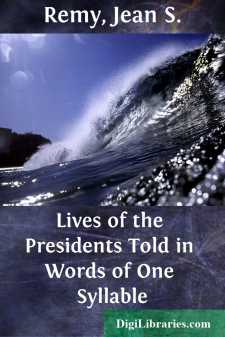 Way down in Vir-gin-i-a, near a small creek, called Bridg-es Creek, there is a shaft of white stone;—on it is the name of George Wash-ing-ton and the date of his birth: Feb-ru-ar-y 22d, 1732.

Now she was not the first wife of Au-gus-tine Wash-ing-ton; and he had two boys, Law-rence and Au-gus-tine, when he made her his wife. These boys were so kind to their small broth-er George, when he was young, and gave him so much help, all through his life, that their names should stay in your minds. When George was three years old his home was burned to the ground, and his fa-ther built a fine new house, just o-ver the riv-er from where the cit-y of Fred-er-icks-burg now stands. Here George went to his first school, and the name of the man who taught him was so queer, it will not go out of your mind;—it was "Hob-by." In those old days, the boys wrote to their boy-friends, just as they do at this day. See what George, when he was nine years old, wrote to his best friend, Rich-ard Hen-ry Lee:—"Dear Dick-ey, I thank you ver-y much for the pret-ty pic-ture book you gave me. Sam asked me to show him the pic-tures and I showed him all the pic-tures in it; and I read to him how the tame el-e-phant took care of his mas-ter's lit-tle boy, and put him on his back and would not let an-y-bod-y touch his mas-ter's lit-tle son. I can read three or four pages some-times with-out miss-ing a word. Ma says I may go to see you and stay all day with you next week if it be not rain-y. She says I may ride my po-ny. He-ro, if Uncle Ben will go with me and lead He-ro. I have a lit-tle piece of po-et-ry a-bout the book you gave me, but I mustn't tell you who wrote the po-et-ry.

"G. W.'s com-pli-ments to R. H. L.And likes his book full well.Hence-forth will count him as his friend,And hopes ma-ny hap-py days he may spend. "Your good friend, "George Wash-ing-ton."

You see the boys in those old days were fond of books, and toys and hors-es just as the boys of to-day are; and there is a tale of George, and a young colt, which shows that he was a brave and strong boy, who did not fear to tell the truth, though he had done wrong. He and some of his boy-friends were in a field, in which were kept some young colts, some of which had been used.

The boys caught one colt, put a bit in its mouth, and held it, while George sprang on its back. The colt, mad with fear, sprang in the air, tore through the field, and tried in vain to throw the boy; at last he leaped with such force, that he broke a blood ves-sel, and fell to the ground dead. Just at this time George's moth-er came out, and saw the dead colt....