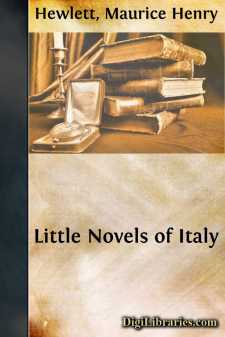 VANNA IS BID FOR

Not easily would you have found a girl more winning in a tender sort than Giovanna Scarpa of Verona at one and twenty, fair-haired and flushed, delicately shaped, tall and pliant, as she then was. She had to suffer her hours of ill report, but passes for near a saint now, in consequence of certain miracles and theophanies done on her account, which it is my business to declare; before those she was considered (if at all) as a girl who would certainly have been married three years ago if dowries had not been of moment in the matter. In a city of maids as pretty as they are modest—which no one will deny Verona to be—there may have been some whose charms in either kind were equal to hers, while their estate was better in accord; but the speculation is idle. Giovanna, flower in the face as she was, fit to be nosegay on any hearth, posy for any man's breast, sprang in a very lowly soil. Like a blossoming reed she shot up to her inches by Adige, and one forgot the muddy bed wondering at the slim grace of the shaft with its crown of yellow atop. Her hair waved about her like a flag; she should have been planted in a castle; instead, Giovanna the stately calm, with her billowing line, staid lips, and candid grey eyes, was to be seen on her knees by the green water most days of the week. Bare-armed, splashed to the neck, bare-headed, out-at-heels, she rinsed and pommelled, wrung and dipped again, laughed, chattered, flung her hair to the wind, her sweat to the water, in line with a dozen other women below the Ponte Navi; and if no one thought any the worse of her, none, unhappily, thought any the better—at least in the way of marriage. It is probable that no one thought of her at all. Giovanna was a beauty and a very good girl; but she was a washerwoman for all that, whose toil fed seven mouths.

Her father was Don Urbano, curate of Santa Toscana across the water. This may very easily sound worse than it is. In Don Urbano's day, though a priest might not marry, he might have a wife—a faithful, diligent companion, that is—to seethe his polenta, air his linen, and rear his children. The Church winked at her, and so continued until the Jesuits came to teach that winking was unbecoming. But when Can Grande II. lorded in Verona the Jesuits did not, and Don Urbano, good, easy man, cared not who winked at his wife. She gave him six children before she died of the seventh, of whom the eldest was Giovanna, and the others, in an orderly chain diminishing punctually by a year, ran down to Ferrantino, a tattered, shock-headed rascal of more inches than grace. Last of all the good drudge, who had borne these and many other burdens for her master, died also. Don Urbano was never tired of saying how providential it was that she had held off her demise until Giovanna was old enough to take her place. The curate was fat and lazy, very much interested in himself; his stipend barely paid his shot at the "Fiore del Marinajo," under whose green bush he was mostly to be seen....