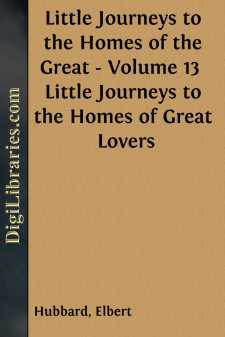 We thank Thee for this place in which we dwell; for the love that unites us; for the peace accorded us this day; for the hope with which we expect the morrow; for the health, the work, the food, and the bright skies that make our lives delightful; for our friends in all parts of the earth, and our friendly helpers in this foreign isle. Give us courage and gaiety and the quiet mind. Spare to us our friends, soften to us our enemies. Bless us, if it may be, in all our innocent endeavors. If it may not, give us the strength to encounter that which is to come, that we be brave in peril, constant in tribulation, temperate in wrath, and in all changes of fortune, and down to the gates of death, loyal and loving one to another.

There is a libel leveled at the Scotch and encouraged, I am very sorry to say, by Chauncey Depew, when he told of approaching the docks in Glasgow and seeing the people on shore convulsed with laughter, and was told that their mirth was the result of one of his jokes told the year before, the point just being perceived.

Bearing on the same line we have the legend that the adage, "He laughs best who laughs last," was the invention of a Scotchman who was endeavoring to explain away a popular failing of his countrymen.

An adage seems to be a statement the reverse of which is true—or not. In all the realm of letters, where can be found anything more delightfully whimsical and deliciously humorous than James Barrie's "Peter Pan"? And as a writer of exquisite humor, as opposed to English wit, that other Scotchman, Robert Louis Stevenson, stands supreme.

To Robert Louis life was altogether too important a matter to be taken seriously. The quality of fine fooling shown in the creation of a mythical character called "John Libbel" remained with Stevenson to the end of his days.

Stevenson never knew the value of money, because he was not brought up to earn money. Very early he was placed on a small allowance, which he found could be augmented by maternal embezzlements and the kindly co-operation of pawnbrokers.

Once on a trip from home with his cousin he found they lacked just five shillings of the required amount to pay their fare. They boarded the train and paid as far as they could. The train stopped at Crewe fifteen minutes for lunch. Lunch is a superfluity if you haven't the money to pay for it—but stealing a ride in Scotland is out of the question. Robert Louis hastily took a pair of new trousers from his valise and ran up the main street of the town anxiously looking for a pawnshop. There at the end of the thoroughfare he saw the three glittering, welcome balls. He entered, out of breath, threw down the trousers and asked for five shillings. "What name?" asked the pawnbroker. "John Libbel," was the reply, given without thought. "How do you spell it?" "Two b's!"

He got the five shillings and hastened back to the station, where his cousin Bob was anxiously awaiting him. Robert Louis did not have to explain that his little run up the street was a financial success—that much was understood. But what pleased him most was that he had discovered a new man, a very important man, John Libbel, the man who made pawnbrokers possible, the universal client of the craft. "You mean patient, not client," interposed Bob.

Then they invented the word libbelian, meaning one with pawnbroker inclinations. Libbelattos meant the children of John Libbel, and so it went.

The boys had an old font of type, and they busied themselves printing cards for John Libbel, giving his name and supposed business and address. These they gave out on the street, slipped under doors, or placed mysteriously in the hands of fussy old gentlemen.

Finally the boys got to ringing doorbells and asking if John Libbel lived within....