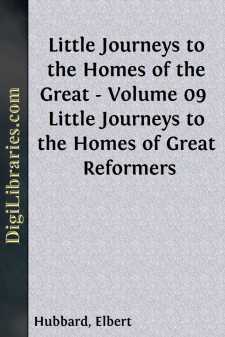 My horse was very lame, and my head did ache exceedingly. Now what  occurred I here avow is truth—let each man account for it as he  will. Suddenly I thought, "Can not God heal man or beast as He  will?" Immediately my weariness and headache ceased; and my horse  was no longer lame.  —Wesley's Journal

Once in a speech on "The Increase of Population," Edmund Burke intimated his sympathy with Malthus, and among other interesting data made note that Susanna Wesley was the twenty-fourth child of her parents. Burke, however, neglected to state how many sisters and brothers Susanna had who were younger than herself, and also what would have been the result on church history had the parents of Susanna named their twenty-third child Omega.

John Wesley was the fifteenth child in a family of nineteen. And yet the mother did her own work, thus eliminating the servant-girl problem, and found time to preach better sermons to larger congregations than did her husband. Four of Susanna's children became famous—John, Charles, Samuel and Martha.

John rebuked and challenged the smug, self-satisfied and formal religion of the time; had every church-door locked against him; sympathized with the American Colonies in their struggle for freedom; and founded a denomination which today is second in wealth and numbers to one alone.

John Wesley left no children after the flesh, but his influence has colored the entire fabric of Christianity. There is no denomination but that has been benefited and bettered by his beautiful spirit.

Charles Wesley was the greatest producer of hymns the world has ever seen, having written over six thousand songs, and rewritten most of the Bible in lyric form. He was "the brother of John Wesley," and delighted all his life in being so called. No one ever called John Wesley the brother of Charles. John had a will like a rope of silk—it slackened, but never broke. He was resourceful, purposeful, courageous, direct, healthy, handsome, wise, witty, happy; and he rode on horseback, blazing the way for many from darkness into light. Charles followed.

Three of the children of Charles Wesley became great musicians, and one of them was the best organist of his time in England.

The third noted brother in this remarkable family was Samuel, who was thirteen years older than John, and exercised his prerogative to pooh- pooh him all his life. Samuel was an educated High Churchman, a Latin scholar, and a poet of quality. Samuel always had his dignity with him. He wrote and published essays, epics, and histories of nobodies; but of all his writings, the only thing from his pen that is now read and enjoyed is a letter of remonstrance to his mother because he hears that she has joined "Jack's congregation of Methodists, and is a renegade from the true religion." Needless to say the "true religion" to Samuel was the religion in which he believed—all others were false. Samuel being an educated Churchman did not know that all religions are true to the people who believe in them....