Little Journey in the World 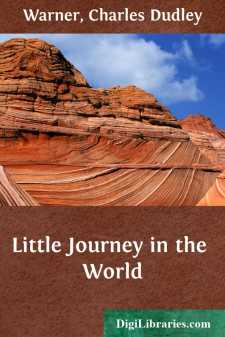 The title naturally suggested for this story was "A Dead Soul," but it was discarded because of the similarity to that of the famous novel by Nikolai Gogol—"Dead Souls"—though the motive has nothing in common with that used by the Russian novelist. Gogol exposed an extensive fraud practiced by the sale, in connection with lands, of the names of "serfs" (called souls) not living, or "dead souls."

This story is an attempt to trace the demoralization in a woman's soul of certain well-known influences in our existing social life. In no other way could certain phases of our society be made to appear so distinctly as when reflected in the once pure mirror of a woman's soul.

The character of Margaret is the portrait of no one woman. But it was suggested by the career of two women (among others less marked) who had begun life with the highest ideals, which had been gradually eaten away and destroyed by "prosperous" marriages and association with unscrupulous methods of acquiring money.

The deterioration was gradual. The women were in all outward conduct unchanged, the conventionalities of life were maintained, the graces were not lost, the observances of the duties of charities and of religion were even emphasized, but worldliness had eaten the heart out of them, and they were "dead souls." The tragedy of the withered life was a thousand-fold enhanced by the external show of prosperous respectability.

The story was first published (in 1888) in Harper's Monthly. During its progress—and it was printed as soon as each installment was ready (a very poor plan)—I was in receipt of the usual letters of sympathy, or protest, and advice. One sympathetic missive urged the removal of Margaret to a neighboring city, where she could be saved by being brought under special Christian influences. The transfer, even in a serial, was impossible, and she by her own choice lived the life she had entered upon.

And yet, if the reader will pardon the confidence, pity intervened to shorten it. I do not know how it is with other writers, but the persons that come about me in a little drama are as real as those I meet in every-day life, and in this case I found it utterly impossible to go on to what might have been the bitter, logical development of Margaret's career. Perhaps it was as well. Perhaps the writer should have no despotic power over his creations, however slight they are. He may profitably recall the dictum of a recent essayist that "there is no limit to the mercy of God."

A LITTLE JOURNEY IN THE WORLD I

We were talking about the want of diversity in American life, the lack of salient characters. It was not at a club. It was a spontaneous talk of people who happened to be together, and who had fallen into an uncompelled habit of happening to be together. There might have been a club for the study of the Want of Diversity in American Life. The members would have been obliged to set apart a stated time for it, to attend as a duty, and to be in a mood to discuss this topic at a set hour in the future....