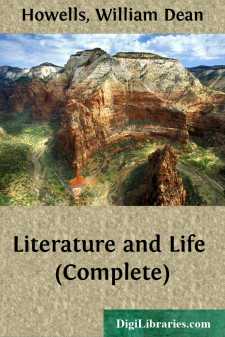 Perhaps the reader may not feel in these papers that inner solidarity which the writer is conscious of; and it is in this doubt that the writer wishes to offer a word of explanation. He owns, as he must, that they have every appearance of a group of desultory sketches and essays, without palpable relation to one another, or superficial allegiance to any central motive. Yet he ventures to hope that the reader who makes his way through them will be aware, in the retrospect, of something like this relation and this allegiance.

For my own part, if I am to identify myself with the writer who is here on his defence, I have never been able to see much difference between what seemed to me Literature and what seemed to me Life. If I did not find life in what professed to be literature, I disabled its profession, and possibly from this habit, now inveterate with me, I am never quite sure of life unless I find literature in it. Unless the thing seen reveals to me an intrinsic poetry, and puts on phrases that clothe it pleasingly to the imagination, I do not much care for it; but if it will do this, I do not mind how poor or common or squalid it shows at first glance: it challenges my curiosity and keeps my sympathy. Instantly I love it and wish to share my pleasure in it with some one else, or as many ones else as I can get to look or listen. If the thing is something read, rather than seen, I am not anxious about the matter: if it is like life, I know that it is poetry, and take it to my heart. There can be no offence in it for which its truth will not make me amends.

Out of this way of thinking and feeling about these two great things, about Literature and Life, there may have arisen a confusion as to which is which. But I do not wish to part them, and in their union I have found, since I learned my letters, a joy in them both which I hope will last till I forget my letters.

"So was it when my life began;So is it, now I am a man;So be it when I shall grow old."

It is the rainbow in the sky for me; and I have seldom seen a sky without some bit of rainbow in it. Sometimes I can make others see it, sometimes not; but I always like to try, and if I fail I harbor no worse thought of them than that they have not had their eyes examined and fitted with glasses which would at least have helped their vision.

As to the where and when of the different papers, in which I suppose their bibliography properly lies, I need not be very exact. "The Man of Letters as a Man of Business" was written in a hotel at Lakewood in the May of 1892 or 1893, and pretty promptly printed in Scribner's Magazine; "Confessions of a Summer Colonist" was done at York Harbor in the fall of 1898 for the Atlantic Monthly, and was a study of life at that pleasant resort as it was lived-in the idyllic times of the earlier settlement, long before motors and almost before private carriages; "American Literary Centres," "American Literature in Exile," "Puritanism in American Fiction," "Politics of American Authors," were, with three or four other papers, the endeavors of the American correspondent of the London Times's literary supplement, to enlighten the British understanding as to our ways of thinking and writing eleven years ago, and are here left to bear the defects of the qualities of their obsolete actuality in the year 1899. Most of the studies and sketches are from an extinct department of "Life and Letters" which I invented for Harper's Weekly, and operated for a year or so toward the close of the nineteenth century....