Literary Tours in The Highlands and Islands of Scotland 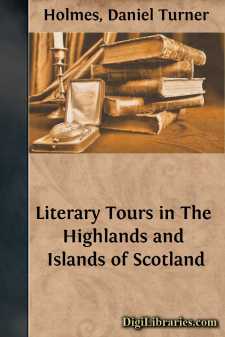 At pretty frequent intervals, during the last four years, I have sallied forth from my home in Renfrewshire, north, south, east, and west, to some of the most remote and isolated nooks of insular and provincial Scotland, on a mission so uncommon as to justify the writing of a book of impressions and experiences. The Highlands and Islands of Scotland are, of course, visited every summer by a great host of excursionists, who go thither to fish, play golf, lounge, climb hills, and otherwise picturesquely disport themselves. A few earnest devotees of science spend their holidays botanising in the glens, scanning the geological strata, looking for fossils, measuring the outlines of brochs and prehistoric forts, or collecting relics of Culdee churches. My journeys were undertaken for none of the objects named: they were entirely connected with libraries and lecturing, and, being undertaken mainly in the months of winter and spring, they have given me the opportunity of noting a great many interesting particulars that the summer traveller, bent on recreation or science, cannot be expected to notice.

I do not think any finer gift could be given to a village community than a collection of useful and entertaining books. The libraries with which my work was connected were sent, free of charge, to strath and glen, and nothing was asked in return, except that the volumes should be well housed and delivered to the people to read by some local librarian. You will find these libraries in all the townships of the Hebrides, from Ness in Lewis, down the long chain of islands, to Islay and Jura. About thirty of them are established in the Shetlands, and as many in the Orkneys. Scores of little villages in Aberdeen, Ross, Sutherland, Argyle, Bute, and Perth, have been gratuitously supplied with them. The same is true of many a weather-beaten, quaint, red-tiled little fishing-village along the shores of the Moray Firth. In the barracks of Fort-George, Inverness, and Dingwall, the soldiers can solace their leisure hours by delightful, patriotic, and instructive reading, furnished to them without money and without price. Even in quiet, pastoral Roxburghshire, at a spot near the birthplace of Dandie Dinmont, you will find one of these serviceable collections of books.

It is a pleasure to me to be able to say that I have visited a great number of the districts mentioned, for the purpose of speaking to the people in a familiar and non-academic way on some of the books which have been presented to them. In this way I have spoken to about 40,000 people, the majority of whom had never previously been present at a discourse on a literary topic. Most of them had, of course, been in the habit of attending religious services and election meetings: but neither of these is the very best preparation for a literary evening. Some of my experiences have been intensely amusing, and I do not think any lecturer has ever, as regards rough roads, inclement weather, and amazing votes of thanks, had quite the same joys and sorrows as I have come through. I have often laughed (good-naturedly, I hope) at what came under my notice, but I am not so conceited as to suppose that the hilarity was always on one side.

It can very easily be seen that he who proposed to visit all the above districts would have some hard and continuous work in prospect. Even on the mainland of Scotland there are many villages of difficult access. The nearest railway station to Durness on Loch Eriboll is Lairg, sixty miles away. Gairloch in Ross-shire is thirty miles distant from the railway station of Achnasheen....