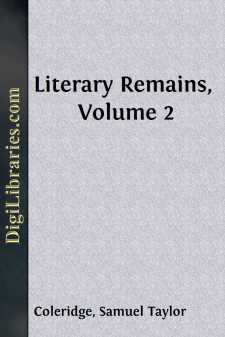 Extract from a Letter written by Mr. Coleridge, in February, 1818, to a gentleman who attended the course of Lectures given in the spring of that year.

My next Friday's lecture will, if I do not grossly flatter-blind myself, be interesting, and the points of view not only original, but new to the audience. I make this distinction, because sixteen or rather seventeen years ago, I delivered eighteen lectures on Shakspeare, at the Royal Institution; three-fourths of which appeared at that time startling paradoxes, although they have since been adopted even by men, who then made use of them as proofs of my flighty and paradoxical turn of mind; all tending to prove that Shakspeare's judgment was, if possible, still more wonderful than his genius; or rather, that the contradistinction itself between judgment and genius rested on an utterly false theory. This, and its proofs and grounds have been—I should not have said adopted, but produced as their own legitimate children by some, and by others the merit of them attributed to a foreign writer, whose lectures were not given orally till two years after mine, rather than to their countryman; though I dare appeal to the most adequate judges, as Sir George Beaumont, the Bishop of Durham, Mr. Sotheby, and afterwards to Mr. Rogers and Lord Byron, whether there is one single principle in Schlegel's work (which is not an admitted drawback from its merits), that was not established and applied in detail by me. Plutarch tells us, that egotism is a venial fault in the unfortunate, and justifiable in the calumniated, &c. …

Extract from a Letter to J. Britton, Esq.

—First permit me to remove a very natural, indeed almost inevitable, mistake, relative to my lectures; namely, that I 'have' them, or that the lectures of one place or season are in any way repeated in another. So far from it, that on any point that I had ever studied (and on no other should I dare discourse—I mean, that I would not lecture on any subject for which I had to 'acquire' the main knowledge, even though a month's or three months' previous time were allowed me; on no subject that had not employed my thoughts for a large portion of my life since earliest manhood, free of all outward and particular purpose)—on any point within my habit of thought, I should greatly prefer a subject I had never lectured on, to one which I had repeatedly given; and those who have attended me for any two seasons successively will bear witness, that the lecture given at the London Philosophical Society, on the 'Romeo and Juliet', for instance, was as different from that given at the Crown and Anchor, as if they had been by two individuals who, without any communication with each other, had only mastered the same principles of philosophic criticism. This was most strikingly evidenced in the coincidence between my lectures and those of Schlegel; such, and so close, that it was fortunate for my moral reputation that I had not only from five to seven hundred ear witnesses that the passages had been given by me at the Royal Institution two years before Schlegel commenced his lectures at Vienna, but that notes had been taken of these by several men and ladies of high rank....